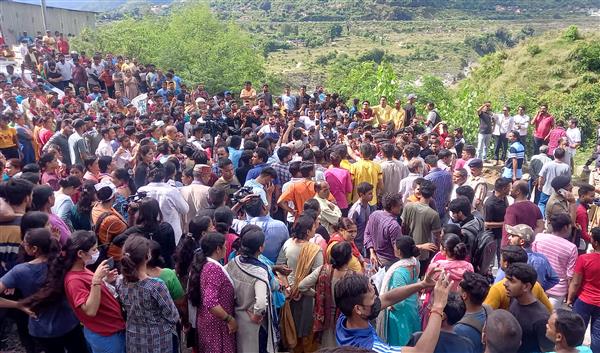 People block the Rishikesh-Badrinath highway in protest against the killing of Ankita Bhandari, at Srinagar in Pauri Garhwal district, on Sunday. PTI Photo

People's anger over the murder of Ankita Bhandari, who worked as a receptionist at a resort in Uttarakhand's Pauri district and was reportedly being forced to provide “special services” to guests, continued with the Rishikesh-Badrinath National Highway (NH) 58 being blocked in protest, even as her last rites were finally conducted on Sunday evening.

Her body was brought to the NIT Ghat here and consigned to flames amid the presence of a large number of people.

A large crowd, comprising students, political activists and common people, had earlier gathered in large numbers at the mortuary of the base hospital where her body was kept. Then, they held a sit-in protest on the Badrinath National Highway in front of the mortuary, demanding the hanging of Ankita's killers, stranding vehicles on both sides of the highway.

Earlier in the day, the family of Ankita, in whose killing Pulkit Arya, the son of now expelled BJP leader Vinod Arya is allegedly involved, refused to perform the last rites, saying they will wait till the final post-mortem report comes.

The provisional post-mortem report had confirmed assault before death and the cause of death as drowning.

Ankita's father Virendra Bhandari has refused to perform the last rites of his daughter.

"The government has tampered with the evidence by running a bulldozer on resort at midnight. Ankita's last rites will be performed only when the final post-mortem report is received. I am not satisfied with the post-mortem report that has come at the moment. The culprits should be given capital punishment using fast track court in this case," he said.

The family finally relented after appeals from Chief Minister Pushkar Singh Dhami and the local administration. Dhami, who saluted Ankita's father, assured that the trial would be held in a fast-track court and all possible help to the family.

"In such times it is natural for people to be angry. The government will provide whatever assistance required for the victim's family," he added.

Meanwhile, Congress MLA from Badrinath, Rajendra Bhandari, on Sunday reached Srinagar to meet the family members. Questioning the functioning of the government, he said that there were six BJP MLAs from Pauri Garhwal district, including two ministers and the Speaker, but none had come to Srinagar yet to meet the relatives.

He said that the resort was razed because the government had to destroy the evidence.

"Ankita should get justice. There should be a high level inquiry into the matter," he said.

On Friday, the police had arrested Pulkit and his two employees in connection with Ankita's death, and her body was recovered on Saturday.

Uttarakhand DGP Ashok Kumar has given an assurance to Ankita’s father that the police will produce enough evidence in court to ensure that his daughter's killers are hanged.

"I have spoken to the victim's father on the phone and assured him of an impartial probe into her killing and strictest punishment to the guilty. They will not be spared at any cost," the DGP said in a social media post.

"I can personally assure you that the SIT looking into the case is collecting all evidences to produce in the court and ensure that the guilty are hanged," he said.

Additional SP Kotdwar Shekhar Chandra Suyal also refuted a report on the social media that evidences at the resort were destroyed.

"No evidence has been destroyed. Our team has done videography of Ankita's room at the resort. We have also collected forensic and scientific evidences. We have enough evidence to prove that the accused are guilty," Suyal said. (With inputs)