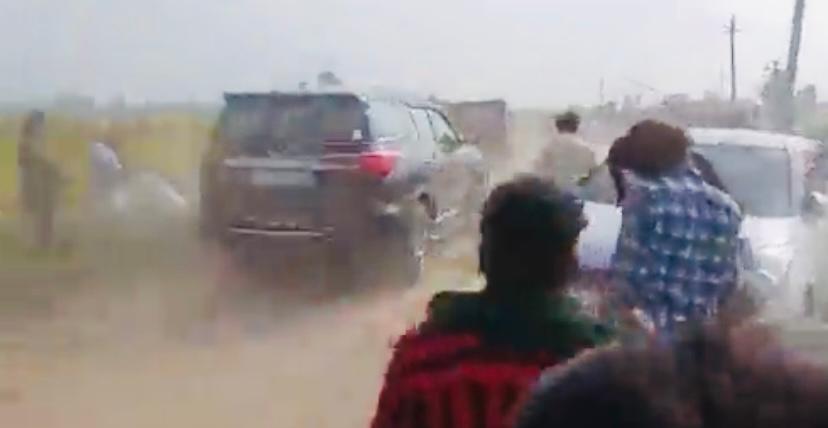 In this video, the driver seems to holding on to the steering wheel firmly and driving at great speed into a group of farmers marching in front of the SUV, with their backs to it.

Union minister Ajay Mishra Teni's claim that his vehicle was attacked by miscreants before the driver lost control and mowed down farmers, stands "exposed" after a cleaner, a longer new clip of the viral video from Lakhimpur Kheri reveals what happened on Sunday before the violent clashes.

The viral video clip shows a black SUV - which belongs to the union minister according to his own admission - ploughing into an unarmed group of protesters at great speed.

Bone chilling footage of farmers marching hit from behind by the black SUV— 4 days and counting, no arrests. #LakhimpurKheri pic.twitter.com/cqE7doRJgg

There are no signs of any attack on the Mahindra Thar vehicle.

It shows no stones or sticks being thrown at the car or that the driver lost control resulting in the death of at least four farmers and injuries to many more.

Editorials: Mowing down protest: If video clip is genuine, Centre should act now

In this video, the driver seems to holding on to the steering wheel firmly and driving at great speed into a group of farmers marching in front of the SUV, with their backs to it.

According to witnesses, it was after this incident, that an enraged mob attacked the cars, set them on fire and four people in the convoy were beaten to death.

A lower resolution, slowed-down version of the same video was earlier shared by a series of opposition leaders as proof that the blame for the Sunday's clashes lay on the convoy of minister's aides and BJP workers.

It may be recalled that farmers had gathered to protest against the visit of union home affairs minister Ajay Mishra and the state's deputy chief minister Keshav Prasad Maurya at a wrestling match.

Farmer groups have been claiming that Mishra's son had been in a car when the vehicle ran over four protesters, killing them. He has denied this charge.

The new video emerged on a day when the Supreme Court announced it was taking up the case as media reports and a letter from two lawyers to Chief Justice N.V. Ramana cast doubts on the Uttar Pradesh police investigation into the incident.

Four days after a murder case was filed against him, the minister's son Ashish Mishra is yet to be arrested and government sources have ruled out the minister Ajay Mishra's resignation, following a meeting with Union Home Minister Amit Shah on Wednesday. IANS