Another woman held in Karnataka, this time during pro-CAA protest 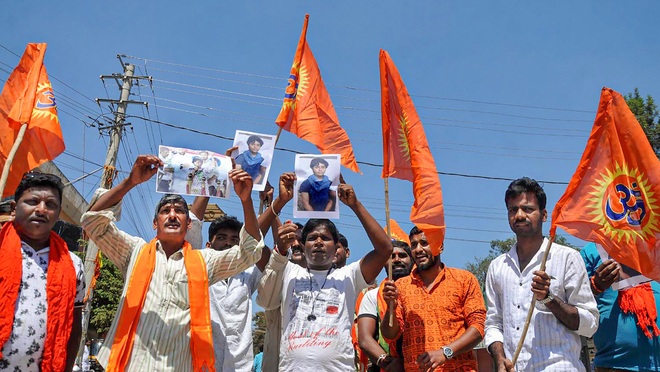 Bajrang Dal activists protest against a girl student who allegedly raised pro-Pakistan slogans at a stir in Bengaluru. PTI

A day after pro-Pakistan slogans were raised by an agitator at an anti-CAA event here, a young woman was arrested on Friday for holding a “Kashmir Mukti (liberation), Dalit Mukti, Muslim Mukti” placard at a counter protest in the city, police said. A case has been registered for offences under the Indian Penal Code including creating enmity between different groups of people against the woman, identified as Arudra, they said.

“We have registered the case suo moto for creating enmity between different groups of people,” Deputy Commissioner of Police Chetan Singh Rathore said, adding she was being questioned.

Later, the woman was produced before a court, who remanded her to 14 days judicial custody till March 5.

Holding the placard with the slogans, Arudra was spotted sitting among the participants of the protest organised by the Hindu Jagaran Vedike against Amulya Leona who had shouted “Pakistan Zindabad” on Thursday. The protesters also hailed the Citizenship (Amendment) Act. She was escorted out of the place as protesters asked her to leave and crowd started gathering, city police chief Bhaskar Rao said.

“She has now been taken into custody for her own safety along with the placard... we will find out her background, where she has come from and who are behind her among other things,” Rao told reporters, adding she did not raise any slogan.

The “Kashmir Mukti, Dalit Mukti, Muslim Mukti” slogans were written in both Kannada and English in the placard held by her. The Hindu Jagaran Vedike organised the protest against Amulya Leona who had raised “Pakistan Zindabad” slogan thrice at an even against the Citizenship Amendment Act. She had made the controversial slogans in the presence of AIMIM chief Asaduddin Owaisi after the organisers of the event under the banner of “Save Constitution” invited her to address the gathering, prompting him to denounce her act. After being removed from the stage, Amulya was later arrested on charges of sedition and produced before a magistrate court which remanded her to 14 days judicial custody. — Agencies