During the two-week long exercise, all satellite communication assets of the Army were activated 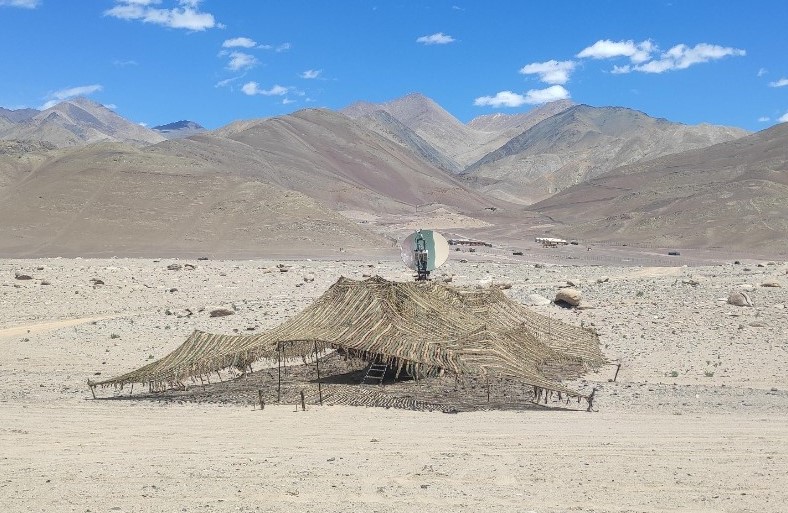 A ground-based terminal for space communication in the Himalayas.

Fine-tuning technology to use space-based assets for communication in future wars, the Indian Army last week conducted a ‘satellite communication’ exercise named ‘Skylight’ to check for operational readiness of all satellite-based systems on ground, including those in forward areas.

During the two-week long exercise all satellite communication assets of the Indian Army were activated. This included 200 static ground-based terminals and some 80 transportable vehicle mounted terminals and man-portable were used in collaboration with agencies including Indian Space Research Organisation (ISRO).

The exercise included a scenario if the ground communication gets snapped in war, how will space assets like satellites and ground terminals perform to provide voice and data connectivity.

Drawing lessons from the Russia- Ukraine war, Indian Army is engaging with the industry and academia to develop hand held secure satellite phones, said sources in the defence establishment.

The operations of satellite communication system known as ‘starlink’ and owned by Elon Musk’s SpaceX was available with Ukrainian forces. It provided real time targets for directing artillery fire, secured internet and GPS to the Ukrainian forces on ground.

The star-link and its impact was studied in a just-concluded Indian Army study on communication, cyber and electromagnetic effects during the Russia-Ukraine war. “Importance of communication system that operate in hostile enemy area have been sufficiently underlined as a lesson from the conflict,” sources said.

Army still does not have a dedicated satellite. It uses 30 percent of The Indian Navy’s GSAT-7A's capacity for communication until its own GSAT-7B gets launched. In December 2018 the ISRO had launched the GSAT-7A satellite equipped with Ku-band transponders, to interlink IAF planes with ground stations. The kind of connectivity which provided real time inputs during the Balakot air-strikes of February 2019. The same capabilities will be in GSAT-7B.

India-US space cooperation is also growing. In April this year at the 2+2 ministerial dialogue, India and US signed a new Space Situational Awareness (SSA) arrangement, acknowledging the pivotal role international cooperation plays in the long-term sustainability and safety of the outer-space environment.

Also, the Indian Army plans to leverage ‘quantum computing’ and communications. The Army, with support from the National Security Council Secretariat (NSCS) in 2021 established the ‘Quantum Lab’ to transform the current system of cryptography –algorithms used to code data and voice for secure transmission. Among several usages, secure transmission is the key to battle as all major equipment uses radio waves to communicate.

As quantum computing advances, it is expected to break into existing encryption methods hence the next step is ‘cryptography after quantum’ – that is algorithms capable to protect sensitive information from enemy’s quantum computers.