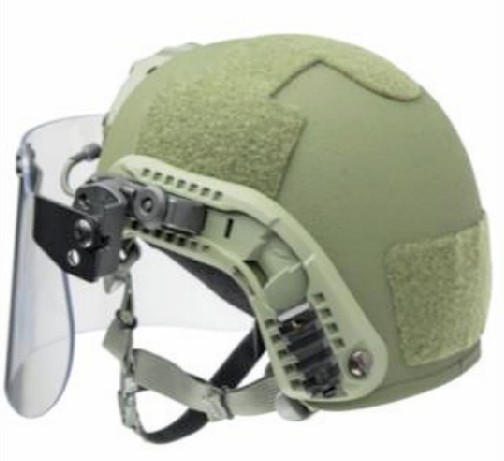 The Army has specified that the helmets must provide protection from 7.62x39 mm mild steel core bullets at 10 meters as well as from high-speed blast fragments (Pic credit: Design released by the Army).

“Ballistic helmets with protection against 9mm bullets have been inducted in service in lieu of fiberglass helmets. With the threat of 7.62 x 39mm bullets to the troops, there is a need to induct ballistic helmets with higher protection parameters,” a request for proposal (RFP) issued by Army Headquarters this week states. “Existing threat along the Line of Control and Line of Actual Control and counter terrorist environment necessitates minimum protection against high-speed rifle bullets and blast fragments,” the RFP adds.

The army has projected a requirement for 80,000 helmets, which includes 3,600 helmets for troops deployed on anti-terrorist operations with the Rashtriya Rifles in Jammu and Kashmir. The indigenous content should be at least 50 per cent.

The Army has specified that the helmets must provide protection from 7.62x39 mm mild steel core bullets at 10 meters as well as from high-speed blast fragments. These should also incorporate tactical rails for attachment of additional equipment such as night vision devices, face visor, torch and in-service radio communication sets.

In June 2020, the Army had issued a request for information to the industry for the procurement of one lakh ballistic helmets that were capable of providing protection against 7.62 mm bullets. Ballistic helmets are made of various composite materials and are lighter and stronger than traditional metallic headgear.

Army officers said that a 7.62 mm rifle bullet is much more lethal than a 9 mm bullet fired from a pistol or sub-machinegun, besides having a longer range. The muzzle velocity of the 7.62 mm AK-47 assault rifle is 2,350 feet per second as compared to 1,312 feet per second of the MP-5, a widely used sub-machinegun.

After phasing out the 7.62 mm Ishpore self loading rifles in the late 1990s, the Army used the INSAS 5.56 mm rifles and light machinegun, then in line with the global trend of using a smaller caliber for assault rifles. There is now a doctrinal shift to revert back to 7.62 mm caliber.

The Army’s recent inductions of the SIG Sauer 716 and AK-203 assault rifles to replace the INSAS have 7.62 mm caliber. Based upon its experiences in counter terrorist operations and asymmetric warfare, the Army is opting for higher caliber personal weapons with the objective of “shoot to kill” rather than the post world war western philosophy of “shoot to incapacitate” by using lighter bullets as wounded soldiers created additional administrative and logistical problems for the enemy. Army officers said that weapons with a higher kill probability are preferred in anti-terrorist operations, especially where a lone terrorist or a small group may be acting on their own.

122 lakh tonne of foodgrains will be given out free of cost ...