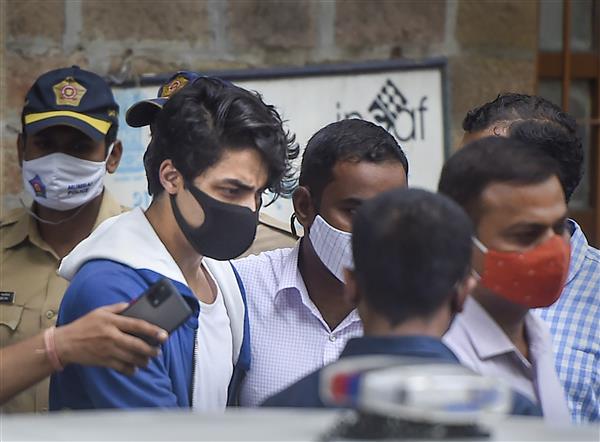 A special court here on Wednesday denied bail to Aryan Khan, the son of Bollywood actor Shah Rukh Khan, observing that ‘on the face of it’, he was indulging in “illicit drug activities on a regular basis”.

His WhatsApp chats also showed, prima facie, that he was in touch with drug peddlers, the court noted.

Aryan (23), arrested with a few others on October 3 after the Narcotics Control Bureau (NCB) raided a cruise ship off the Mumbai coast and claimed to have seized drugs including charas, has now moved the Bombay High Court.

The special NDPS Act court in its 21-page order noted that WhatsApp chats of Aryan Khan prima facie revealed that he was “dealing in illicit drug activities on a regular basis” and therefore it cannot be said that he was not likely to commit a similar offence if released on bail.

It also held that Aryan knew that his friend and co-accused Arbaaz Merchant was in possession of drugs, and hence there was “conscious possession” even though the NCB had not found any drugs on Aryan himself.

“Considering the prima facie involvement of the applicants/accused No 1 to 3 (Aryan Khan, Merchant and Dhamecha) in commission of grave and serious offence, this is not a fit case for granting bail,” the judge said in the order.

The material placed before it by the NCB showed on the face of it that section 29 of the NDPS Act, pertaining to conspiracy, was applicable, said the court.

“Therefore, it is not possible to record a satisfaction at this stage that the applicants have not committed any offence under the NDPS Act,” the order said.

Case papers and voluntary statements of Aryan Khan and Arbaaz Merchant disclosed that they possessed drugs for consumption and enjoyment, the court noted further.

“These things go to show that accused No 1 (Aryan) was having knowledge of the contraband concealed by accused No 2 (Merchant) in his shoes,” it said.

In Aryan’s WhatsApp chats, there is reference to “bulk quantity and hard drugs” and “there is prima facie material showing that accused No 1 was in contact with persons dealing in prohibited narcotic substances”, the order said.

“Prima facie it appears that there is a case of conspiracy and abetment as alleged by the prosecution,” it said.

Earlier, a magistrate’s court had rejected the accused’s bail pleas, saying only a special court can hear these matters.

Khan, Merchant and Dhamecha, among others, were arrested on October 3 for alleged conspiracy, possession, consumption, purchase and trafficking of drugs under the NDPS Act.

They are now in judicial custody. While Aryan Khan and Merchant are lodged at the Arthur Road prison, Dhamecha is lodged at the Byculla women’s prison in the city.

So far, 20 persons have been arrested in the case. —PTI