As stand-off continues, troops from other parts mobilized for Ladakh frontier : The Tribune India

As stand-off continues, troops from other parts mobilized for Ladakh frontier 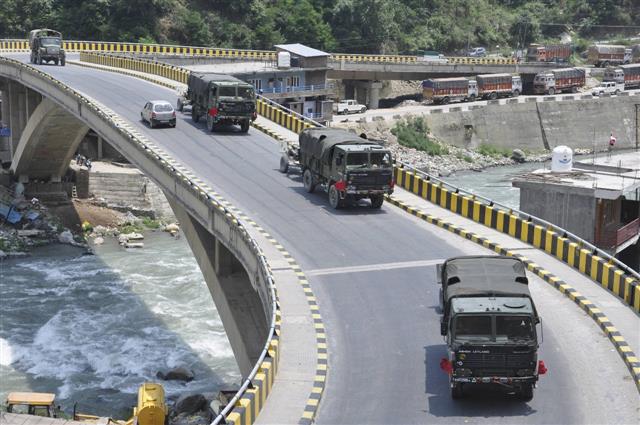 An army convoy moves on Manali-Leh highway, in Manali. — PTI

Amidst continuing tension along the Line of Actual Control in Ladakh, the Army has mobilized additional troops for the frontline.

Several more formations from various parts of the country are now being moved to the Himalayan heights for countering the Chinese.

While a large number of troops have already been deployed in the disputed region since Chinese incursions began in several areas a couple of months ago, additional force builds up is underway since the violent Galwan Valley face-off that resulted in the death of 20 Indian soldiers and China now staking claim to the entire valley.

The present level of troops stationed now in Ladakh is about double than it was earlier.

The highways to Leh have been closed to civilian traffic and heavy military movement is taking place along the two land routes Ladakh – one through the Srinagar-Leh axis and the other via the Manali axis.

The highways, which remain closed through winters due to snow for about six months in a year, were re-opened by the Border Roads Organisation this year about 3-4 weeks earlier than usual.

Besides additional infantry, artillery and engineer units, as well as support elements, are being moved to Ladakh from their peacetime locations.

In addition to Ladakh, which has been a traditional hot-spot for Chinese incursions, other sectors like Himachal and Uttarakhand are also being reinforced.

While Himachal, where the two districts of Kinnaur and Lahaul and Spiti share borders with China have remained largely dormant since 1962, there have been reported Chinese activity in this sector also.

The Indian Air Force too is heavily committed in the build-up along the Line of Control, with its transport fleet comprising the US made C-17 and Russian IL-76 heavy-lift aircraft as well as the AN-32 medium-lift aircraft undertaking more than usual sorties to forward areas for airlifting men and material from various places into Ladakh.

Unlike as in the Kargil conflict of 1999, when the Soviet-origin Mi-26, which is the world’s heaviest helicopter, had played a vital role by airlifting artillery guns, weapon systems and other critical equipment to the war zone, this time they would not be seeing action.

The fleet of three helicopters remains on the ground as they are long due for an overhaul, for which they have to be ferried to Ukraine.

The newly requisitioned US helicopters, CH-47 Chinook as well as the AH-64 Apache have also been deployed in Ladakh.

IAF bases, including those operating fighters and air defence systems, are in a high state of alert.

The Navy too is part of the ongoing action, with its Boeing P-8 surveillance aircraft being used for aerial reconnaissance, map the area for troops locations and monitor the electromagnetic spectrum.