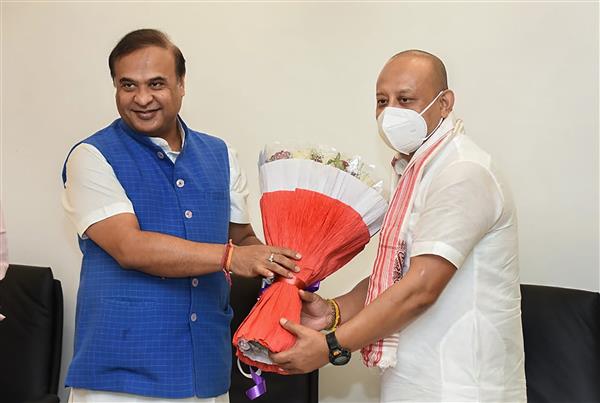 “Young, and energetic, his joining our fold will strengthen and benefit the party immensely. I welcome him to the BJP Pariwaar,” the CM said on Twitter.

Borgohain, a legislator from Thowra constituency, and Bora were inducted into the party at its state headquarters where Assam BJP chief Bhabesh Kalita was present.

“I was worried about many internal issues in the Congress and these are likely to remain in the party. So, I have decided to switch over to the BJP and will serve people of the state under the leadership of our chief minister,” Borgohain said.

He is the second Congress MLA to quit the party in less than three months from the formation of the new BJP-led government in the northeastern state.

Four-time MLA Rupjyoti Kurmi had resigned as a legislator and was inducted into the BJP on June 21.

He was the lone MLA from the Tea Tribe community in the Congress.

Borgohain, who had first become an MLA from Thowra constituency in Sivasagar district in 2011, resigned from the Congress on July 30 citing that the “internal political atmosphere” within the party has been “changed”.

He lost the 2016 assembly election but won the Thowra seat in the last polls held earlier this year. He defeated BJP candidate Kushal Dowari by 2,006 votes.

The Congress accepted Borgohain’s resignation and wrote to Assam Assembly Speaker Biswajit Daimary to disqualify him as an MLA. He tendered his resignation from the House on Saturday.

On July 28, the APCC served a show-cause notice to Borgohain and asked him to clarify his position on the media reports about his plan to join the BJP.

Since Sarma became the chief minister of Assam, several leaders of the opposition party have left it.

Sarma had also quit the grand old party and joined the BJP in 2015.

Jury Sharma Bordoloi, who was the Guwahati district president of the Congress, had also left the party recently and taken membership of the BJP on July 2.

Former minister Rajib Lochan Pegu had resigned as the president of the Majuli district unit of the Congress on July 6, amid reports that he would also crossover to the saffron party.

After Borgohain’s resignation from the assembly, the Congress’ strength in the 126-member House has come down to 27, while the BJP has 60 MLAs.

The AIUDF has 16 legislators, the AGP nine, the UPPL five, the BPF three and the CPI(M) one. There is an Independent legislator.

Two MLAs have died and two others resigned. Former Chief Minister Sarbananda Sonowal, who has become a minister at the Centre, is yet to submit his resignation paper in the assembly. — PTI