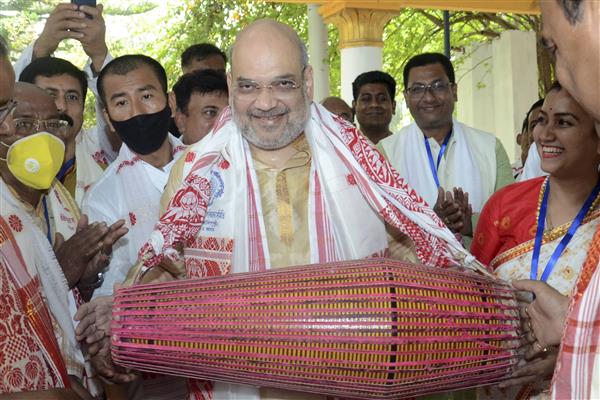 Union Home Minister Amit Shah plays an instrument inside Batadrava Than, the birthplace of Srimanta Sankardev in Nagaon District of Assam on February 25, 2021. PTI file photo

The National Democratic Alliances (NDA) vote share is likely to increase by 1.9 per cent in the upcoming Assam elections, while it may bag 72 seats out of the overall 126, the IANS-CVoter survey revealed on Saturday.

On Friday, the Election Commission of India announced the dates for elections to the 126-member Assam Assembly, set to be held over three phases on March 27, April 1 and April 6 with the results to be declared on May 2.

According to the survey of more than 4,700 participants done in six weeks, the National Democratic Alliance led by the BJP may get 43.8 per cent vote share as against 41.9 per cent in the last election held in 2016. It may score 72 seats, down by two.

Notably, the United Progressive Alliance's (UPA) vote share is likely to increase dramatically with survey projections showing it at 43.8 per cent in comparison to 2016, when it logged merely 31 per cent. The seats will increase from 26 to 47.

The last assembly polls in 2016 in Assam were held in two phases wherein the Bharatiya Janata Party and its allies had won 86 of the state's 126 assembly constituencies.