Assembly Polls 2022: BJP 'finalises' seat-sharing formula with allies in UP : The Tribune India

Assembly Polls 2022: BJP 'finalises' seat-sharing formula with allies in UP

Nishad Party, Apna Dal want their share of seats raised this time | Mamata to campaign for Akhilesh on Feb 8 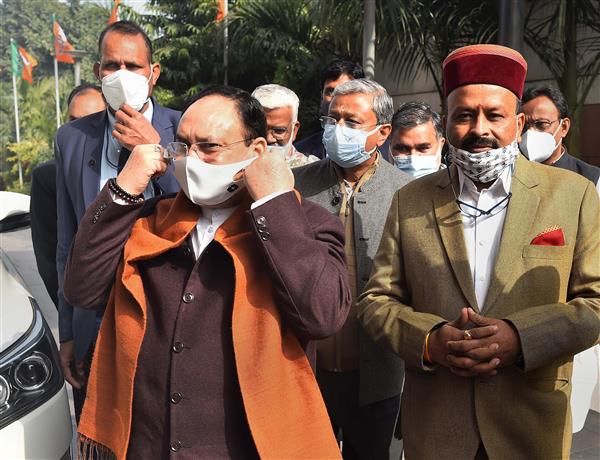 BJP president JP Nadda arrives at the party's headquarters for a core committee meeting in New Delhi on Tuesday. PTI

The BJP, which today announced two more candidates for the upcoming Assembly elections to UP, is believed to have “almost finalised” the seat-sharing formula with allies, the Apna Dal and the Nishad Party, which appear to be seeking a better deal than the last time, according to sources.

While the BJP is believed to have decided to give “18 seats to the Apna Dal and 12-15 to the Nishad Party”, the two allies are said to be angling for more. The Apna Dal, which had contested 11 seats last time, is demanding 36 seats, say sources.

So far, the BJP has announced 109 candidates for the 403-member Uttar Pradesh Assembly. A meeting of the BJP core committee on Uttar Pradesh was held on Tuesday to discuss candidates’ names and seat sharing with the alliance partners. The central leadership is also said to be working on some change in the strategy.

While Union Home Minister Amit Shah will be undertaking an extensive tour of the state beginning on January 22, almost taking the command in his hand, the source say the party has decided to be “more generous with allies and some of the incumbent legislators, who would have otherwise been axed, might also be repeated”.

The BJP had earlier planned to change between 100 and 150 sitting MLAs, while the “re-think in strategy” seems to be guided by the recent exodus of key OBC leaders, including three ministers, from the Yogi Adityanath Cabinet. The party is considering limiting this number to 40-50 even though internal surveys have suggested a bigger change to tackle the anti-incumbency factor and a resurgent Samajwadi Party, say the sources. So far, in the first two phases, the BJP has dropped 20 MLAs.