At time of national crisis, top court cannot be a mute spectator: SC

Don't use this platform to recriminate, says Bench led by Justice DY Chandrachud 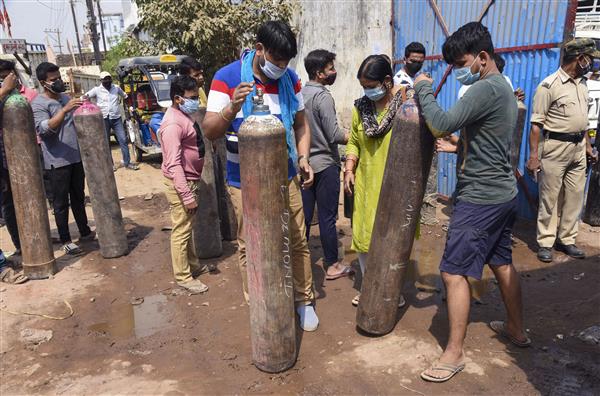 Maintaining that it can't be a mute spectator during a national crisis, the Supreme Court on Tuesday sought to know how the Centre planned to meet the increased demand for COVID19 vaccines once vaccination begins for all above 18 from May 1.

"As on date vaccination is for 45 years and above and from May 1 vaccination is to be opened to all ages who are above 18. The union shall clarify the projected requirements of vaccines due to enhancement of coverage," a three-judge Bench led by Justice DY Chandrachud told Solicitor General Tushar Mehta.

Asking the Centre to clarify the basis and rationale for pricing of COVID19 vaccines, it said the government could invoke the Parents Act to regulate the pricing of vaccines.

"Modality should be put in place to ensure that shortage and deficit would be looked into." It added.

"Comprehensive panel of doctors should be made available for a citizen to know steps to take during the pandemic. The Centre to apprise us about the steps taken to form an identified panel of specialists which will be replicated at all state levels," it said.

In view of senior advocate Harish Salve's decision to recuse himself as an Amicus Curiae, the Bench appointed senior advocates Jaideep Gupta and Meenakshi Arora to replace him.

The court wanted to know about projected demand for oxygen in future, steps taken to augment supplies to affected states and monitoring mechanism.

It also asked the Centre to apprise it of the steps taken to ensure the supply of drugs such as Remdisivir and the modality put in place for seamless communication between district collectors with the Ministry of Health along with daily monitoring.

Directing the states to file their replies by Thursday 6 pm, it posted the matter for further hearing on Friday. The Centre has already filed its affidavit.

The top court had taken suo motu cognisance of the COVID-19 management last week and asked the Centre to present a national plan to deal with the health crisis concerning the supply of oxygen and essential drugs, method of vaccination and lockdown.

On Tuesday it clarified that it didn't intend to enter the domain of the Executive. The top court said its platform should not be used to recriminate.

It also said the high courts can continue to hear the cases relating to COVID19 as they were in a better position to monitor the situation in their respective jurisdiction.

"There is need for top court's intervention on certain national issues as there might be matters related to coordination between states," the bench said, adding it was playing a complementary role and if high courts have any difficulty in dealing with issues due to territorial limitations, it would step in to help.

Mehta said the Centre would never oppose any constitutional court whether a high court or the Supreme Court.

"We are not questioning anyone's jurisdiction. You have to examine the steps taken by us. But there are certain issues of perception. This (COVID19) is from early 2020 and nobody anticipated the second wave," Mehta said.

While informing the court that the Centre has filed its affidavit, Mehta told the Bench that "It's a fight for the nation...that is the spirit of the reply. if we succeed, the nation succeeds. It's not a time for political bickering."

"We will take this case day to day basis and not keep pending for long. but let us go through the affidavit by the Centre," the Bench said.

The top court also sought to know about the utilisation of central paramilitary forces' paramedics and army facilities, army doctors and railways which can be made available for quarantine, vaccination or beds.

On behalf of the West Bengal Government, senior advocate Vikas Singh said for 73 years vaccine price for the centre and states had been the same and the first time it's different for the Centre and states.