Villages to hold panchayat today if demand not met 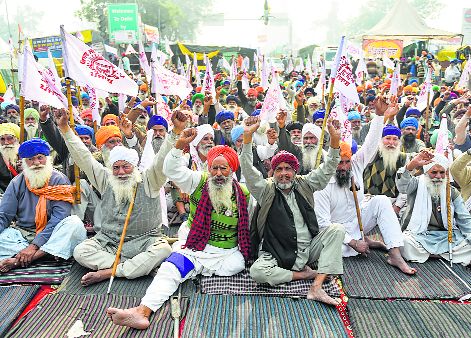 Farmers raise slogans at a dharna in Singhu on Thursday. PTI

After the violence that rocked the Capital on Republic Day, it may be an uphill task for farm leaders to keep the agitation against the Centre’s farm laws on course as the first signs of resistance to their sit-ins have begun to surface in Haryana.

While the farm leaders are out to restrategise, locals from villages around Singhu and Tikri have started voicing their concern about the adverse impact of the stir on their lives and livelihood, keeping the police on their toes.

Protesting close to the main site of the agitation at Singhu, villagers of Manoli, Aterna and Sersa among others demanded that the farmers vacate the border. Stating that the traffic flow must resume between Delhi and Haryana, the residents announced the decision to hold a panchayat tomorrow to decide the future course of action if their demand was not met. In Rewari, local petrol pump dealers along with residents of some villages held a meeting on the Delhi-Jaipur highway bordering Shahjahanpur to demand that the protesters should clear the highway. They also threatened to remove the barricades if the farmers failed to do so, giving the local administration some anxious moments. They claimed that the dharna was adversely affecting the sale of fuel and resulted in sanitation issues and other problems for the nearby villages.

In Yamunanagar, a group of miscreants threw stones at a religious place and damaged several vehicles late last night during a protest march by the locals against the incidents of violence in Delhi on Republic Day. A case has been registered.

Sources said police presence had been beefed up in view of the voices being raised against the closure of borders to avert any confrontation between the farmers and those protesting their presence.

Till January 26, villagers around the Singhu and Tikri borders were extending all sorts of services to the protesting farmers, even ensuring a regular flow of supplies.