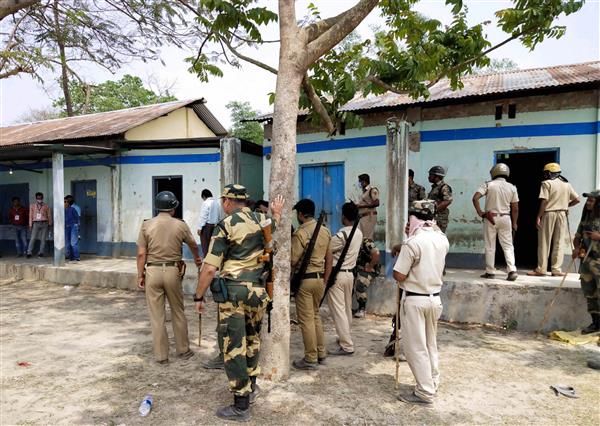 Security personnel keep vigil at a polling station after Election Commission ordered of stopping the voting exercise at polling station number 126 in Sitalkuchi, where clashes erupted between locals and central forces, at Sitalkuchi in Cooch Behar district on Saturday. PTI photo

A Central Industrial Security Force (CISF) quick reaction team allegedly coming under attack during a security patrol and injury to a child in the commotion are stated to have triggered the violence at a polling booth in West Bengal’s Cooch Behar district which left four people dead on Saturday, official sources said.

They said it all started around 9:35 am when a CISF team led by an Inspector-rank officer was inspecting the Jor Patki area of Sitalkuchi constituency jointly with the local police with an aim to “clear the elements” that were stopping voters from reaching the polling booth no 126 at Amtali Madhyamik Shiksha Kendra and other locations nearby.

The security personnel intervened to stop this crowd of about 50-60 people, and in this commotion a child fell down. After this, some “miscreants” attacked the four-wheeler carrying the CISF quick reaction team (QRT) and the personnel on-board, the sources said.

“The QRT reacted in self-defence and fired six rounds in air to disperse the mob. Later, a Deputy Commandant rank officer and in-charge of the CISF unit (567/Charlie Company) reached the spot and pacified the mob. He later left,” a senior officer said.

About an hour later, the officials said, a group of about 150 people reached the polling booth no 186 in the vicinity, and “manhandled the polling staff”.

The crowd allegedly beat up a homeguard and an ASHA (Accredited Social Health Activist) worker and also tried to snatch the weapon of the on-duty CISF personnel when they intervened, they said.

As the mob got “aggressive”, two rounds were fired in the air. But sensing the “imminent danger to their life”, the security personnel fired another seven bullet rounds towards the crowd, the officials said.

Four people were killed in the firing by the central forces, police said.

In the meantime, a CISF QRT and some reinforcements from the local police reached the spot, they said, adding the polling was halted even as the crowd began to melt soon.

In Delhi, the Election Commission later ordered the adjournment of polls at polling station number 126 in the Sitalkuchi Assembly constituency.

The Central Industrial Security Force is an armed police force under the Union Home Ministry and is tasked to guard major civil airports and vital installations in the country. It has deployed multiple companies for providing security during the eight-phased assembly polls in West Bengal. — PTI