Crackdown ordered | Misbranded products to be taken off shelves 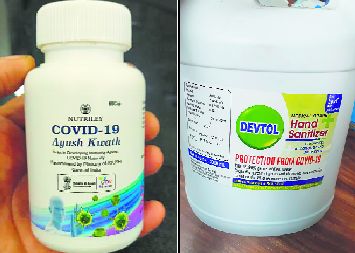 Coming down heavily on AYUSH manufacturers for flooding markets with products claiming to have anti-Covid properties, the Centre has directed states to crack down on those indulging in the malpractice.

In a letter to state principal secretaries, the Union Ministry of AYUSH has said products with false claims should be taken off shelves and FIRs registered within a week against erring manufactures.

“The menace of spreading misinformation about AYUSH remedies for Covid in print, electronic and social media has come to light. Several activities, including false claims, publicising so-called approvals of research or product manufacturing about Covid control from the Ministry of AYUSH and writing Covid-related claims and name of the ministry on the labels and containers of products tantamount to contravention of law,” the Centre has written to states.

It has also asked the State Licensing Authority for AYUSH and state drug controllers to take action against the spread of wrong information, fake claims and misbranding happening under their jurisdiction under Section 7 of the Drugs and Magic Remedies (Objectionable Remedies) Act, 1954, and Section 33 of the Drugs and Cosmetics Act, 1940.

“A warning may be issued and if not complied with, an FIR will be filed in cases brought to the notice of the licensing authority and drug controller directly or forwarded by the ministry,” the Government of India order states.

“Our markets are flooded with AYUSH hand sanitisers and disinfectants labelled with false claims that they have anti-Covid properties. Oral ayurvedic capsules and tablets are also being sold with labels like Covid Ayush Kwath, which claims to boost immunity. All these products are licensed by the AYUSH Licensing Authority, but drug controllers can also take action against such product makers,” Taneja said.

Former Haryana State Drug Controller GL Singla said several such hand sanitisers being sold in markets containing 80 per cent alcohol did not fit into the definition of ayurvedic drugs. “We can’t even imagine that an AYUSH product is using 80 per cent alcohol as excipient or stabiliser for neem, tulsi or other such herbal products in the ayurvedic drug. All such hand sanitisers being sold by AYUSH makers are illegal,” Singla said.