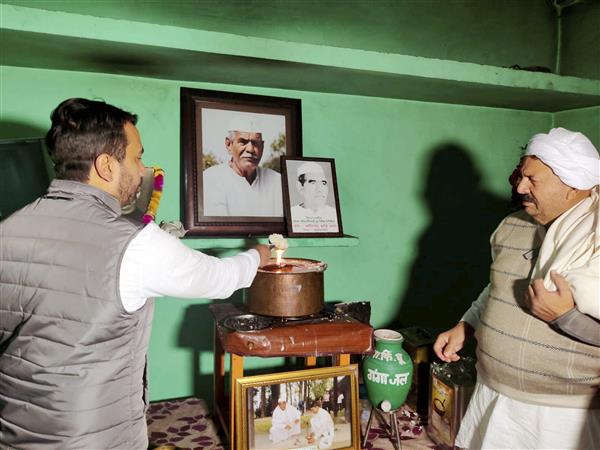 Rashtriya Lok Dal (RLD) chief Jayant Chaudhary hit out at the “system” on Thursday for granting bail to Union minister Ajay Mishra’s son Ashish Mishra, an accused in the Lakhimpur Kheri violence that claimed eight lives including that of four farmers, within four months of the incident.

Bharatiya Kisan Union (BKU) leader Rakesh Tikait dubbed the development as the “BJP’s petty politics” and said farmers would appeal against the decision to grant bail to Ashish Mishra in a higher court.

Tikait, the spokesperson of the BKU and a prominent face of the farmers’ agitation, is believed to have brokered a truce between the local villagers and government authorities in the aftermath of the Lakhimpur Kheri incident.

The RLD president had met the families of the four farmers who were killed on October 3, 2021 in the Tikunia area of Lakhimpur Kheri district in Uttar Pradesh after they were knocked down by a jeep.

Ashish Mishra, an accused in the case, was granted bail by the Allahabad High Court on Thursday.

“Minister Ajay Teni’s son Ashish has got bail in the Lakhimpur Kheri murder case. This is just an example of the BJP’s petty politics. We have faith in the justice system. Will appeal in a higher court. We will make farmers and youngsters across the country aware of the atrocities and injustices being committed on farmers,” Tikait tweeted in Hindi.

BKU spokesperson Saurabh Upadhyay described the court order granting bail to the minister’s son as an “undemocratic attack” on the “democracy” in the country.

“Is it that easy for people charged with murder to get bail?” he asked and hit out at the Centre for not asking the minister to step down from his post.

“When will the farmers of the country get justice?” Upadhyay asked while noting that the government is yet to deliver on the promises it had made to farmers, who ended their year-long anti-farm laws protest in December 2021.

The SKM, umbrella organisation of over 40 farmer unions, too condemned the decision of granting bail to Ashish Mishra.

“The order of the Allahabad High Court granting bail to the chief accused in the Lakhimpur Kheri murder case, Ashish Mishra alias Monu, is unfortunate and surprising. The brutal case of four farmers and a journalist being crushed to death in broad daylight by the son of a Union minister was a trial for the rule of law across the country. In such a case, despite clear evidence, the murder accused getting bail so soon, and that too on the first day of elections in Uttar Pradesh, is a matter of surprise,” SKM said in a statement.

“It is also surprising that without any proof, it has been speculated by the high court that the driver must have driven the vehicle over the crowd in panic. The comments made by the court on the (farmers’) agitation without any context are unwarranted. The court granting bail to Ashish Mishra without considering the firm possibility of a politically powerful accused influencing the witnesses is extremely disappointing. This order blurs the hope of a fair investigation and justice in this heinous murder case,” it added.

SKM demanded that the government should immediately file an appeal challenging the High Court’s order.

Opposition parties and farmers’ groups have been demanding the resignation of Ajay Mishra as the Union minister of state for home affairs in the wake of the Lakhimpur Kheri incident.

They have also voiced their apprehension that being a Union minister, Mishra could influence the investigation in the case in which eight people—four farmers, two BJP workers, a driver and a journalist—were killed.