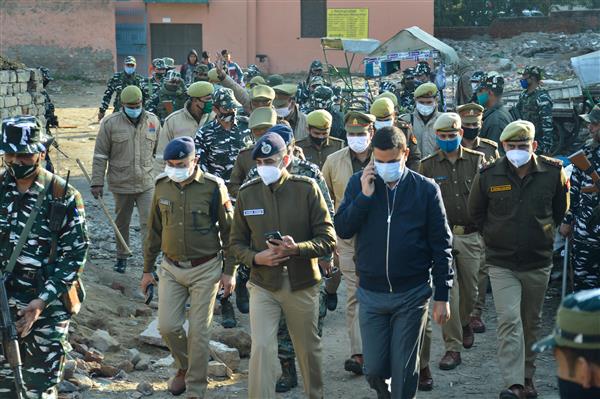 CRPF and police personnel take out a flag march ahead of the Uttar Pradesh Assembly elections, at Makanpur in Ghaziabad on Friday. PTI photo

The Bharatiya Janata Party released a list of 91 candidates for the Uttar Pradesh Assembly polls on Friday, dropping around 17 sitting MLAs while retaining the sitting legislator in key constituency Ayodhya, Ved Prakash Gupta.

Meanwhile, the party has repeated several ministers, including Siddharth Nath Singh from Allahabad West and Nand Kumar Gupta ‘Nandi’ from Allahabad South. Among those dropped include Co-Operative Affairs Minister Mukut Bihari Verma. His son Gaurav Verma has been fielded from his Kaiserganj seat in Bahraich.

The Central Election Committee (CEC) has finalised almost all candidates for all the remaining seats of Uttar Pradesh, say sources, adding that the names will be announced over the next few days.