Be it individual or institutions, duties our first priority: PM Modi : The Tribune India 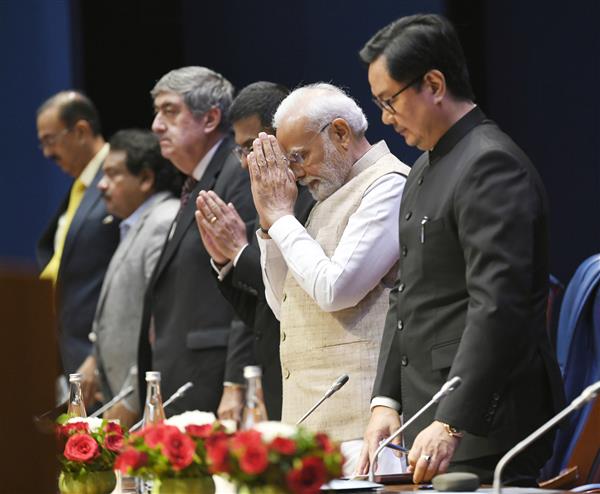 Prime Minister Narendra Modi with Union Law Minister Kiren Rijiju and others during the Constitution Day celebrations in the Supreme Court in New Delhi on Saturday. PTI

Prime Minister Narendra Modi on Saturday said fulfilling fundamental duties should be the first priority of citizens to take India to greater heights as it marches ahead towards the centenary of its Independence.

Addressing the Constitution Day celebrations at the Supreme Court here, Modi said the entire world was looking at India, which was witnessing rapid development and economic growth.

“Be it an individual or institutions, our duties are our first priority. The ‘amrit kaal’ is the era of duties for us,” the PM said as he quoted Mahatma Gandhi to emphasise the importance of fundamental duties. Fundamental rights were those responsibilities that should be fulfilled by citizens with utmost dedication and true integrity, he said.

Virtual justice clock exhibits vital statistics of the justice delivery system at the court level, giving details of the cases filed, disposed of and pendency of cases on a daily, weekly and monthly basis.

JustIS mobile app 2.0 is a tool available to judicial officers for effective court and case management by monitoring pendency and disposal.

Digital court is aimed at making court records available to judges in the digitised form to enable courts to go paperless.

S3WaaS stands for secure, scalable and sugamya websites. It provides a framework to generate, configure, deploy and manage websites for publishing specified information and services related to the district courts.

Modi also paid tributes to the victims of the 26/11 Mumbai terror attacks that took place in 2008 on Constitution Day.

Talking about the contribution of 15 women members of the Constituent Assembly, Modi said, “One of them was Dakshayani Velayudhan, who belonged to a backward section of society. She had made important interventions on many issues related to the Dalits and people belonging to the lower strata. People like Durgabai Deshmukh, Hansa Mehta, Rajkumari Amrit Kaur and many other women members made important contribution to issues related to women.”

“The words, ‘We, The People’, in the Preamble are not ordinary words, these are an evocation, a pledge, a belief, an emotion which has been the mother of democracy,” Modi said.