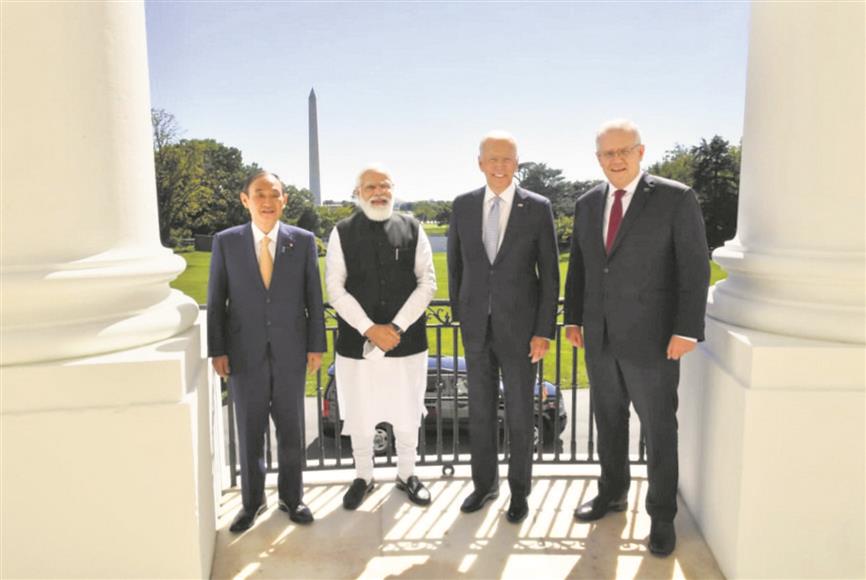 The first in-person summit of Quad nations opened in Washington on Friday with PM Narendra Modi hoping that it would be a force for global good by ensuring prosperity and peace in the Indo-Pacific and the world.

The summit, hosted by US President Joe Biden at the White House, saw all four leaders noting that the grouping had made excellent progress since its first summit held virtually six months ago.

None of the leaders mentioned China in their opening statements though some spoke of an Indo-Pacific free of coercion. Known to forget names, Biden introduced PM Modi as “my friend from India” just as he had referred to Australian PM Scott Morrison as “my friend from Down Under” while announcing AUKUS security treaty a week ago. PM Modi noted that the four countries had come together for the first time in 2004 to extend support to the Indo-Pacific region that had been hit by tsunami.

“Today, the world is grappling with the pandemic and we are meeting once again as Quad and working for humanity,” he said, observing that the Quad initiative to produce one billion vaccines in India would greatly help countries in the Indo-Pacific region.

The Quad, he hoped, would move forward to find answers to wide-ranging issues such as supply chains, global security, climate action, Covid response and technology.

Biden described Quad as a group of democratic partners, sharing the same world view and a common vision of the future, coming together to take on key challenges. “`We are making excellent progress,” he said while announcing fellowships for students from Quad countries to pursue advanced degrees in STEM and said the plan to manufacture one billion vaccines in India was on track.

The four major democracies of the world, he declared, “know how to get things done and are up to the challenge”.

Australian Prime Minister Scott Morrison said a trusted and secure cyberspace and addressing supply chain problems should be Quad’s priorities. Its collective strength, he hoped, would lead to an Indo-Pacific where disputes were settled peacefully in accordance with international law.

*PM was accorded due seniority, and he was asked to be the last to arrive and the first to leave.

*PM was the lead speaker on the theme of tech and cyber security, and made important suggestions on taking forward cooperation.

*Biological E will produce 1 million doses of Janssen vaccine by next month and India will finance 50% of first consignment.