Claiming it to be the largest poll in the world amid the Covid-19 pandemic in terms of electorate size, the Election Commission today announced the three-phase schedule beginning October 28 for the Bihar Assembly elections. The counting will take place on November 10. 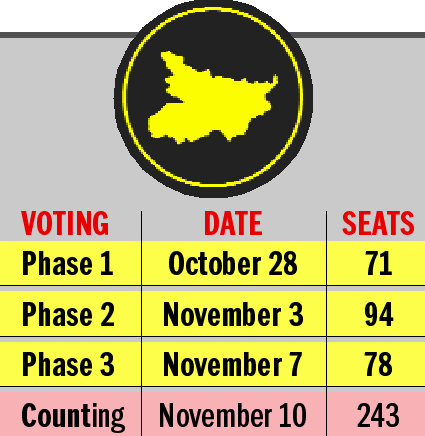 The Election Commission will take a call on bypoll to one Lok Sabha and 64 Assembly seats on September 29 after going through inputs provided by poll officials and chief secretaries of the states concerned.

Notifications for the three phases would be issued on October 1, October 9 and October 13, respectively, the CEC said. The model code of conduct (MCC) would come into force immediately.

To ensure that social-distancing norms are followed properly, the time for voting has been increased by one hour. The voters will be able to cast their votes between 7 am and 6 pm. However, the voting in Left Wing Extremism (LWE)-affected areas will end at 5 pm. Around 1 lakh polling stations would be set up across the state. — TNS