Bihar to increase women representation in state police to 35 per cent: Nitish Kumar : The Tribune India

Bihar to increase women representation in state police to 35 per cent: Nitish Kumar 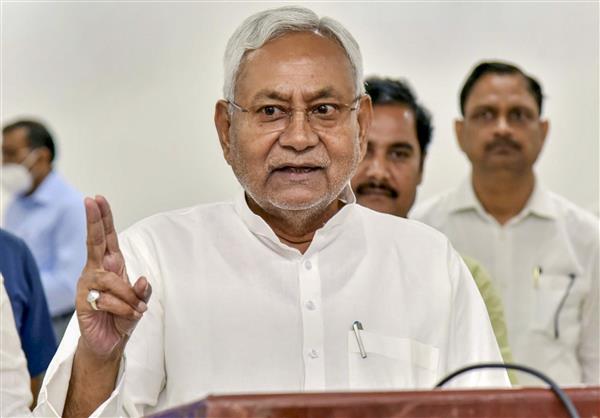 Chief Minister Nitish Kumar on Wednesday said the Bihar government will soon increase the representation of women in the state police force to 35 per cent.

Kumar said at present the representation of women in Bihar Police is around 27-28 per cent.

“The representation of women in state police is almost 28 per cent in Bihar. The increased presence of women in the state’s police force has not only empowered women but also made the constabulary more efficient and effective. Now, the state government will increase their (women) representation to 35 per cent”, Kumar said during an event organised by the state Home department to distribute appointment letters to 10,459 new recruits of Bihar Police.

The chief minister said the overall appointment process in police force need to be accelerated. He said against the target of 1.5 lakh recruitments, only 1.08 lakh appointments have been made in Bihar Police.

The CM asked the Home department officials to work fast in the direction of deploying 160 to 170 police personnel for every one lakh population in the state.

He said in Bihar, the work of police has been divided into two parts – investigation and maintenance of law and order – in a bid to maintain rule of law in the state.

Kumar asked the officials to ensure that investigation is completed in 60 days so that criminals could be awarded sentences speedily after proper trial in court.

Now, youths are applying more for jobs in Bihar Police rather than applying for contractual appointments in defence services, he added.

Yadav further said, “Policing has remarkably improved in the state. Those who try to create a divide in the society on the name of caste, creed and religion, will be strictly dealt with”.

Meanwhile, commenting on the state government’s distribution of appointment letters to 10,459 new recruits of Bihar Police on Wednesday, Bihar BJP Spokesperson, Nikhil Anand, said, “It’s a recruitment scam. The Grand Alliance government in Bihar is making false and fake claims of giving new jobs. These 10,459 police personnel were appointed previously during the NDA government and they are undergoing training. Despite knowing the fact, the state government distributed them appointment letters on Wednesday”.