Health state subject, it is for state govts to decide if they want to give it free or otherwise, says party 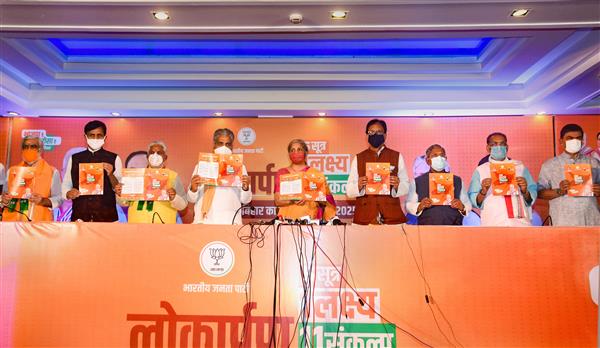 Led by Union Finance Minister Nirmala Sitharaman, the BJP on Thursday released its manifesto for the Bihar Assembly polls with promises like 19 lakh jobs in the next five years, MSP regime for lentils and free COVID-19 vaccination to reach out to farmers, youth and people at large.

However, the BJP’s promise of free vaccine, which prompted the CM of another poll-bound state Tamil Nadu to take a similar pledge, was met with widespread criticism from rivals who accused the saffron party of playing on “COVID fears of the people”.

तुम मुझे वोट दो मैं तुम्हे वैक्सीन .... what appalling cynicism! Will the ElectionCommission rap her & her shameless Govt on the knuckles? https://t.co/ri1UlWWmgD

Taking a swipe, main rival RJD said the vaccine belongs to the country, not the BJP.  Interestingly, the CM face of ‘mahagathbandhan’, Tejashwi Yadav, also had a point about Sitharaman releasing the vision document, terming it a clear case of lack of BJP leadership in Bihar.

The election document was unveiled by Sitharaman and senior leaders, including Bhupender Yadav, Nityanand Rai, Ashwini Choubey and Ravi Shankar Prasad. Deputy CM Sushil Kumar Modi, who has tested positive for the coronavirus disease, is admitted in AIIMS-Patna.

Countering the criticism on vaccine promise, BJP’s IT cell in charge Amit Malviya said not just Bihar, the Centre will provide vaccines to all states at nominal cost and it was up to the state to decide whether to give it for free or not since health is a state subject. “BJP’s manifesto promises free COVID-19 vaccine. Like all programs, the Centre will provide vaccines to states at a nominal rate. It is for the state governments to decide if they want to give it free or otherwise. Health being a state subject, Bihar BJP has decided to give it free. Simple,” Malviya said reacting to the criticism.

By promising free vaccination for Covid in its election manifesto BJP has again proved that it's more dangerous than virus.
A which don't treat it's people equally has no right to rule the country.
Shame on the cheap ideology of BJP.

Coming a day before Prime Minister Narendra Modi hits the campaign trail in the state, the BJP’s manifesto speaks about his vision of making ‘Atmanirbhar Bihar’ and goes with the tagline “BJP hai to bharosa hai” , emphasising on  trust enjoyed by him among  masses by virtue of pro-people measures such as the Jan Dhan scheme, the Ujjwala Yojana, etc.

According to the surveys, while Nitish Kumar appears to be losing ground, the Prime Minister continues to sway masses in politically-sensitive Bihar. Sitharaman said the party believes in “fulfilling poll promises”. “As soon as the COVID-19 vaccine will be available for production at a mass scale, every person in Bihar will get free vaccination. This is the first promise mentioned in our poll manifesto,” she added.

Indian minister quoting her party (BJP ) manifesto promises free #COVID19 #vaccine to each person from Bihar state which is going to polls; sparking concerns about whether a vaccine will be used as a political tool, rather than reaching those on frontline, and most at risk, first https://t.co/S3L4bWReLm

Requesting voters to extend support to the NDA CM candidate Nitish Kumar, she said: “Bihar is a politically-sensitive state. Here, people cannot be fobbed off with empty promises. Claims made by parties are likely to be weighed against their past track record. This is where the BJP scores.”

Apart from free vaccination for coronavirus and recruitment of teachers in primary, secondary and higher educational institutions, the BJP also proposed to develop the state into an IT hub with a promise of five lakh jobs in the sector.

The document also promised employment in the health sector which is in for a major facelift through projects like the AIIMS at Darbhanga.

Other promises include self-reliance for one crore women through microfinance, ‘pucca’ houses for 30 lakh people and boost to fisheries, dairy sector and production of maize, fruits, vegetables, betel leaves, honey and makhana, etc., through farm producer organisations and introducing Hindi as a medium of instruction for medical, engineering and other technical courses.

BJP’s manifesto promises free Covid vaccine. Like all programs, center will provide vaccines to states at a nominal rate. It is for the state Govts to decide if they want to give it free or otherwise. Health being a state subject, Bihar BJP has decided to give it free. Simple.