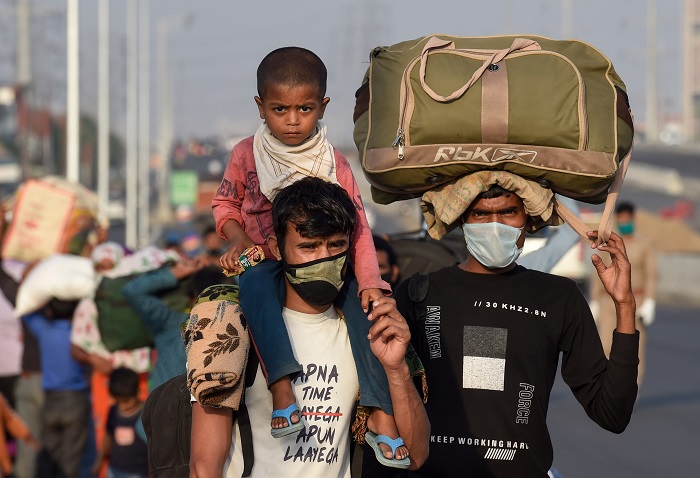 Migrants walk towards their native place in Uttar Pradesh near Gazipur in New Delhi. PTI

Leaders may dismiss the observation but the ruling BJP appears to be on the back foot on at least two accounts — the migrants crisis and the overdrive of ‘fake’ news and ‘selective’ targeting of Muslims during the lockdown. The latter has not just been highlighted by prominent members of the community in the Arab World but also by the party’s ideological fountainhead, the RSS.

It is believed that only after RSS Sarsanghchalak Mohan Bhagwat said that an entire community should not be vilified for the mistakes of a few, apparently referring to the Tablighi Jamaat incident, in his address to the cadres on April 26 that regular attacks by BJP spokespersons in television debates against the community toned down.

Also the focus shifted to the big humanitarian crisis unfolding across the country in the form of heart-wrenching visuals of migrants walking on roads and railway tracks to return homes, some also losing their lives in accidents in the process. The RSS has not said anything openly on the issue so far but affiliate BMS has been quite vocal about attempts to change the labour laws by BJP-run Uttar Pradesh and Madhya Pradesh.

Observers say the saffron party and the government may try to “divert” attention by holding individual state governments responsible for their residents, but the decision of the lockdown, much like the controversial demonetisation, will always belong to and will be identified with Prime Minister Narendra Modi.

The migrant crisis has dented Prime Minister Modi’s carefully crafted image of someone coming from a humble background, which the BJP successfully used to woo economically weaker sections and win many political battles in the past seven years. Observers add that it also left the society "sharply divided" into two sections — the middle/affluent and the economically weaker.

“The economically weaker section, especially in the Hindi heartland, has been most committed to the BJP ever since Modi, someone whom they believed to be their own, came to power. No one can predict the future and the next general elections are four years away but currently the stock of his government is down on two accounts, handling of the migrants issue and the systematic targeting of Muslims during the lockdown,” says political analyst Sudheer Panwar.

Though several fact-checking platforms and researchers have compiled fake videos against Muslims and attacks prompted by online abuse, apparently a report by a think tank of the Home Ministry headed by Amit Shah has also red-flagged targeting of minorities over the Covid pandemic.

Recently, a study, ‘Temporal Patterns in COVID-19 misinformation in India’, at the University of Michigan also pointed towards “a rise in the number of debunked misinformation, especially following the third week of March” when the discourse dominated by “discussions of a possible lockdown and about infections” gradually “changed to Muslims and religion more significantly”.

“From our data we found that news sources ranging from less widely consumed, regional digital news to heavily engaged national news have been complicit in spreading misinformation,” it said.