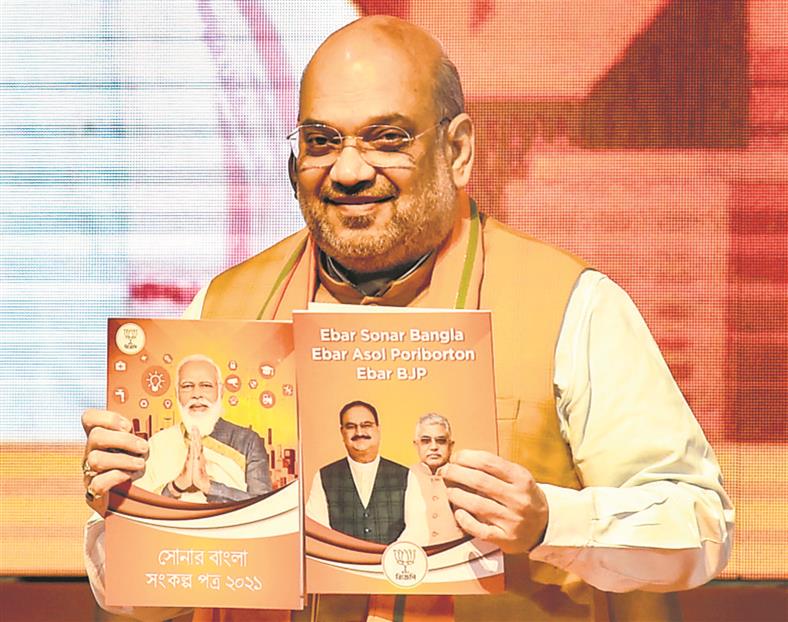 Thirty-three per cent reservation for women in state government jobs, employment to at least one person in every family, implementation of the Citizenship Amendment Act, 2019, institution of Tagore prize on the line of Nobel Prize and Satyajit Ray Award on the line of Oscars to recognise global excellence and implementation of 7th Pay Commission scales for state government employees were some of the highlights of BJP election manifesto released by Union Home Minister Amit Shah in Kolkata today.

It also promised creating a corpus of Rs 5,000 crore for women self-help groups and providing Rs 2 lakh assistance to girl children on turning 18. West Bengal has over 3.5 crore women voters. The BJP hopes the pro-women promises, which found place right at the top of the “Sonar Bangla Sonkolpo Potro-2021”, as the BJP manifesto was christened, would be able to impress the women voters.

Shah’s assurance to “implement the CAA in the first Cabinet meeting” is aimed at Matua voters.

The party manifesto also promised a dole of Rs 10,000 annually to refugee families for a period of five years and Rs 3,000 monthly pension to “Matua dalpatis” (social leaders).

The manifesto also promised inclusion of Mahishya, Tili and certain other Hindu communities in the list of OBCs, if the party came to power.

Gorkhas were once again promised “permanent political solution to the issue of Darjeeling Hills, Terai, Siliguri and Dooars region”. The manifesto promised recognising 11 Gorkha sub-tribes as STs and setting up in Darjeeling a museum featuring Gorkha freedom fighters.