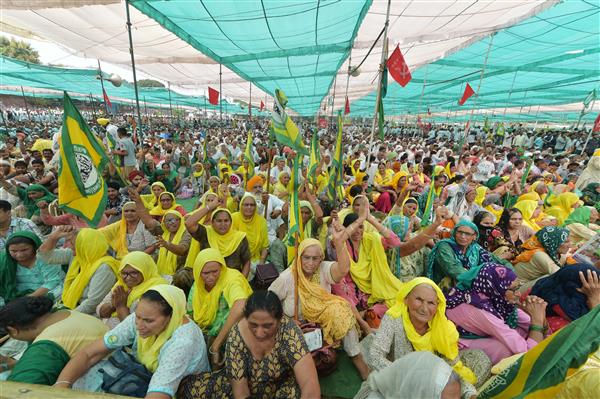 The BJP on Sunday termed the ‘Kisan mahapanchayat’ organised in Muzaffarnagar an “election meeting” and accused its organisers of indulging in politics with assembly polls approaching in a number of states, including Uttar Pradesh.

Thousands of farmers from Uttar Pradesh and neighbouring states gathered at Muzaffarnagar on Sunday for the ‘Kisan Mahapanchayat’ organised by the Samyukt Kisan Morcha (SKM) to protest the Centre’s controversial farm laws.

The BJP’s ‘Kisan Morcha’ head and MP Rajkumar Chahar claimed in a statement that it is politics and not concerns for farmers which have been on the agenda of those behind the ‘mahapanchayat’.

“This was very much a political and election meeting. The opposition and these farmer union leaders have been using the shoulders of farmers to engage in politics,” he said.

Chahar claimed that no government has done so much for farmers as the one led by Prime Minister Narendra Modi has in the last seven years.

The farmers’ protest at Delhi’s borders against the three contentious laws has been going on for over nine months. They have been demanding the repeal of the laws, which they feel will do away with the MSP system, leaving them at the mercy of big corporations. PTI