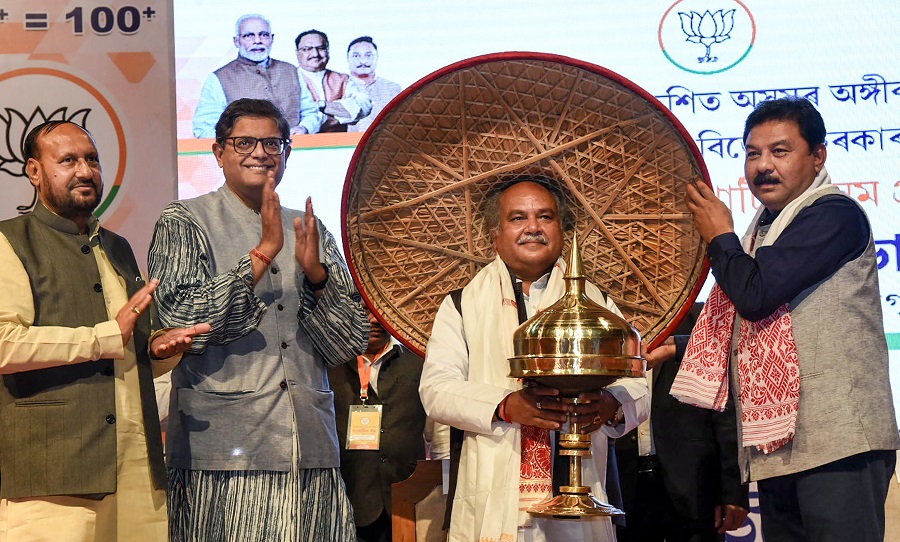 Union Minister Narendra Singh Tomar being felicitated with a Jaapi – traditional Assamese hat – by Assam BJP president Ranjit Kumar Dass at the release of a mobile app for the upcoming Assam Assembly elections in Guwahati on Thursday. PTI

Agriculture Minister Narendra Singh Tomar on Thursday said the results of local bodies elections in Punjab should not be viewed in context of the ongoing farmers’ protests against the three central farm laws.

Also interestingly, while BJP leaders in Punjab have been claiming that the party is on an upswing since parting ways with the Shiromani Akali Dal, Tomar said that the former allies contested separately in these elections which was the main reason for the BJP not doing well.

"It is not correct to link the result of municipal corporation polls in Punjab with farmers’ agitation. We were weak in Punjab and used to fight polls in alliance with the Akali Dal. This time we fought separately, which caused us losses,” he said while speaking at Guwahati.

Tomar is the BJP’s election in-charge in the poll-bound Assam where the party has an incumbent government.

Notably, the BJP’s  drubbing in Punjab has been linked directly with the three laws, against which Punjab emerged as the epicentre.