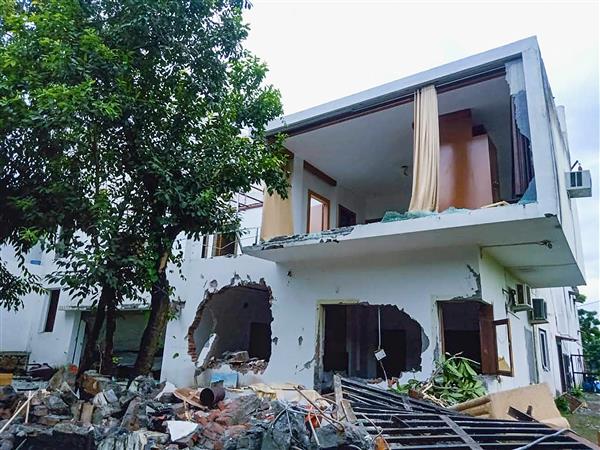 An illegal resort of accused demolished by authorities at Pauri Garhwal. PTI

With public anger mounting over the murder of 19-year-old Uttarakhand resident Ankita Bhandari, the BJP expelled prime accused Pulkit Arya’s father Vinod Arya and brother Ankit Arya from the party while municipal authorities razed Pulkit’s resort where the victim worked as a receptionist.

The body of Ankita, who was working as a receptionist and went missing on September 18, was recovered from a canal in Rishikesh with DGP Ashok Kumar citing the victim’s chats to say she was allegedly murdered for refusing “special services” to guests at Vanantara resort located in Pauri’s Yamkeshwar block.

Vinod Arya is a former minister and member of the BJP OBC Morcha’s national executive while Ankit held MoS rank as the state OBC welfare cell’s vice-chairman. The police had on Friday arrested resort owner Pulkit Arya, manager Saurabh Bhardwaj and deputy manager Ankit Gupta who “confessed to the crime”. As protests erupted and people broke glass panes and attacked BJP’s Yamkeshwar MLA Renu Bisht’s car, CM Pushkar Singh Dhami resorted to damage control announcing the formation of a special investigation team. “I am distraught at this heart-rending crime. The accused will get the strictest-possible punishment,” Dhami tweeted.

A mob, mostly comprising women, intercepted the police vehicle carrying the three accused. Reports said while trying to thrash the accused, the protesters tore off their clothes.

A Facebook friend of Ankita informed the police on Saturday that the victim was under pressure to offer “special services to guests”, which she had refused. The police cited chats to corroborate the claim noting that Ankita had been under duress for several days before her death. The case is reminiscent of the April 30, 1999, murder of model Jessica Lal, who was shot dead by Manu Sharma, son of former minister and then Congress leader Venod Sharma. Manu was sentenced for life and release prematurely from Tihar Jail in 2020. — TNS

A Facebook friend of Ankita alleged she was killed because she refused to sleep with guests, as demanded by resort owner.