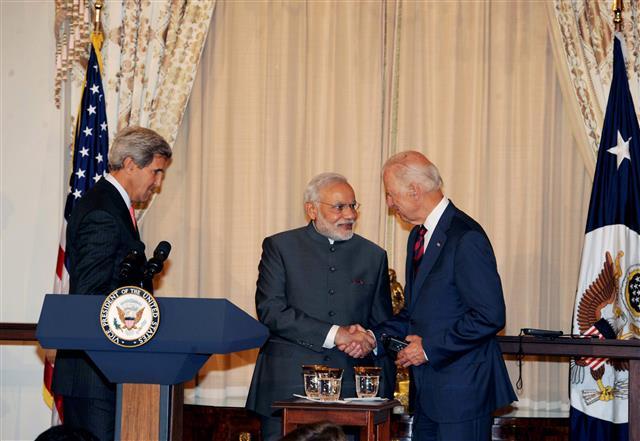 US President-elect Joe Biden provided a snapshot of the altered relationship with India during his phone conversation with Prime Minister Narendra Modi late Tuesday night.

Among the five priorities highlighted by Biden were “strengthening democracy at home and abroad” and maintaining a “secure and prosperous Indo-Pacific region”.

Donald Trump, in contrast, went easy on the lockdown in Kashmir as well as on the CAA and NRC protests in India. On the Indo-Pacific, Trump had pushed for a “free and open Indo-Pacific”, whereas Biden’s terminology is a “secure and prosperous Indo-Pacific”. Analysts interpret this change in emphasis to mean that Biden will not be at daggers drawn with China like the Trump administration.

The other three focus areas are launching the global economic recovery, combating Covid and future health crises, and tackling the threat of climate change, according to the readout provided by the Biden transition team.

The Indian version of the Modi-Biden phone call did not delve into similar wordplay. It said PM Modi reiterated his firm commitment to the Indo-US strategic partnership.

Biden’s first phone call was made on November 10 to Canadian PM. The conversation with PM Modi was clubbed with a round of calls with leaders of Chile, Israel and South Africa. The transition team’s readouts of each of the conversations showed that Biden was prepared with country-specific issues.

Biden also spoke about “strengthening democracy” with Chile’s billionaire President Sebastian Pinera. With Israel PM Benjamin Netanyahu, he promised unstinting support to their security interests but also said he would “address the many challenges confronting our countries”, in an indication that the Trump-Jared Kushner approach to Israel may see modifications.