Till the statue, made of granite, is completed, a hologram statue of his would be present at the same place 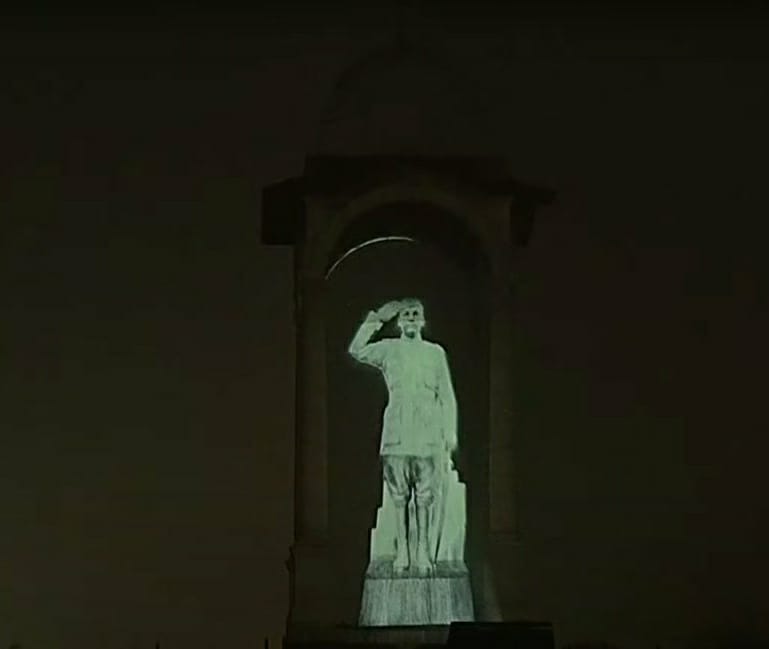 Nearly 50 years after a statue of freedom fighter Subhas Chandra Bose replaced that of King Edward VII in Old Delhi, ‘Netaji’ is now set to take the hallowed space left behind by his son King George V under an ornamental canopy facing the India Gate.

In 1939, an imposing marble statue of King George V at the site near India Gate was unveiled by the then viceroy as a memorial to the British monarch under whose reign the capital of ‘New Delhi’ was built, according to archival records.

However, it and the statue of King Edward VII were ousted in the late 1960s and dumped at the site of the 1911 royal durbar in northwest Delhi, now known as Coronation Park.

The canopy at the India Gate, which has been lying empty since 1968, will house a granite statue of Netaji, with official sources saying its installation will be a case of India “reclaiming” its history.

In Old Delhi, the heroic statue of Netaji along with his INA compatriots was installed at the ‘Subhas Park’ in 1975, which was earlier called the ‘Edward Park’, near Jama Masjid, heritage activist Sohail Hashmi said.

‘Edward Park’ till the late 60s had an imposing equestrian statue of King Edward VII in the garden built in his memory, whose foundation was laid by his son King George V on December 8, 1911, and it was unveiled by George’s son and then Prince of Wales Edward in 1922 during his royal tour of India.

While the statue of Edward VII found its way to Toronto later, the towering marble statue of King George V in durbar regalia stands at a corner of the Coronation Park on a plinth.

King George V ruled until his death in January 1936, after which memorials were built and statues erected in various cities under the British Empire, the most notable among them being New Delhi—the administrative seat of a country that was held as the ‘Jewel in the Crown’.

The ‘George V Memorial’ was planned next to the All-India War Memorial Arch (now called India Gate), and Sir Edwin Landseer Lutyens, the chief architect of New Delhi, designed the canopy and the layout of the memorial, according to archival records and old books.

The gently tall and exquisite statue, crafted out of white marble, was designed by famous British sculptor Charles Sargeant Jagger and its models were exhibited in 1933 and 1935 at the Royal Academy, according to victorianweb.org, a scholarly resource.

However, Jagger died in 1934 before he could complete his work, which was then completed by other artistes, it says.

The statue of George V beneath the oriental-style canopy, endowed with royal motifs and surrounded by a pool of water, was unveiled by Viceroy of India Lord Linlinthgow on November 14, 1939, according to old documents and archives accessed by PTI.

Born in 1865 in London, King George V was coronated as a king in 1910, and the next year, he travelled along with his consort Queen Mary to India to attend the famous 1911 Delhi Durbar, where he had also announced the shifting of the capital to Delhi from Calcutta.

On December 15, 1911, the royal couple laid the foundation stone of the ‘new capital’ of the British Raj and the imperial city, which would later be christened ‘New Delhi’, was built over a period of nearly two decades. It was formally inaugurated in February 1931 by Viceroy Lord Irwin.

“The King was everybody’s King. More particularly can we who are gathered here be sensible of this personal relationship with the Sovereign, who 28 years ago announced his decision to restore Delhi to its ancient birth right and who laid the first stones of his Imperial Capital,” as per the text of the Viceroy’s speech published in Indian Information publication in 1939.

The famed canopy stands on four columns of the Delhi Order devised by Lutyens for the new capital’s main buildings sitting on the Raisina Hill complex radially opposite the India Gate on a long and wide axis called Rajpath (earlier Kingsway).

The canopy will now house a grand statue of freedom fighter Netaji Subhas Chandra Bose, which will be installed at India Gate as a symbol of India’s “indebtedness” to him.

Till the statue, made of granite, is completed, a hologram statue of his would be present at the same place.

A section of historians and heritage activists, however, have lamented the “sudden transition” of “this sacred landscape”, and said, any change in this heritage precinct should have been done only after “due deliberations and proper public consultations”.

Historian and author of “Connaught Place and the Making of New Delhi”, Swapna Liddle, feels, the canopy should have “remained empty” as a “symbol of the end of the Raj”.

“Statues inspire curiosity, and with time can assume a controversial nature. And, while removal of George V’s statue was done in a nationalistic wave seen post-Independence, I feel the canopy should have been left unoccupied. No, one person only belongs there, there are too many heroes who made our free India. It’s not appropriate to install any single leader’s statue,” she said.

Other historians also recalled the time in the late 80s when there was a proposal to install a statue of Mahatma Gandhi in the vacated canopy, but it faced a lot of opposition, and eventually the planned statue was moved to Parliament House complex.

Hashmi, who conducts heritage walks in the city, underlined that a project of such dramatic a scale, should have been done only after “proper and due consultations with the public, including experts and not suddenly announced, as if, it is some magic trick being performed”.

“Bose is our great hero, and his statue could have been installed elsewhere in Delhi. But, to give him a space earlier occupied by a British ruler of India, and that too which was a memorial built after the king’s death, is not suitable by any stretch of imagination,” he argued.