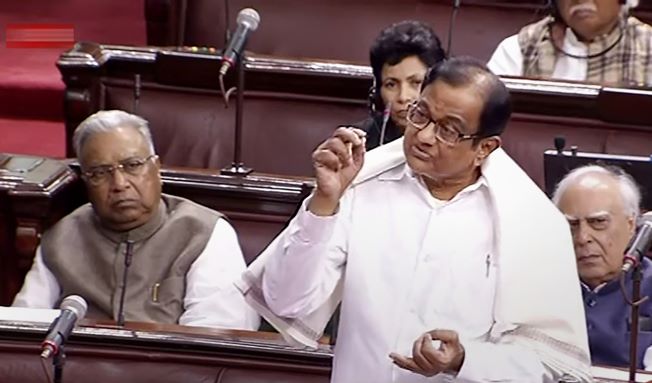 Claiming that the Citizenship (Amendment) Bill, 2019 is "blatantly unconstitutional", Congress leader P. Chidambaram said in the Rajya Sabha on Wednesday that the government is introducing a new category called citizenship by arbitrary executive feat and this law will be struck down in the court.

"Now this government is introducing a new category called citizenship by arbitrary executive feat. I am asking this Parliament to oppose the government in passing what is blatantly unconstitutional law," he said.

He further said that parliamentarians are elected representatives of the people.

"The Constitution has asked us in the first instance to judge the constitutionality of the Bill. We have a responsibility to pass what is constitutional," he said.

The Congress leader said: "Not all of us are lawyers and in fact all of us should be lawyers. So we must bring collective wisdom and commonsense to say is it constitutional or not."

"What we are doing here is abdicating our primary responsibility in favour of another three entities of the Constitution. What we are doing is pushing the issue to the lap of the judges," he said.

Chidambaram believes that the Bill will not pass judicial scrutiny and will land in the court. "Do you think it will stop here? It will not stop here. It will eventually go to the judges and judges are respectable people but they are unelected. Unelected judges and unelected lawyers will ultimately decide whether what we did is constitutional or not. This will be a slap on the face of Parliament."

He further said: "Knowing that the bill is unconstitutional, I am afraid this government is ramming through this bill in order to advance its Hindutva agenda. This is a sad day. Thankfully they are not amending the Constitution. They are only making a law and I am absolutely confident and clear in my mind this law will be struck down."

He asked questions in the House over the Bill and sought answers from the Union Home Minister Amit Shah. "I have a few questions. How do we identify only six religious groups and leave out others like Ahmadiyya and Rohingya and others. There are three Abrahamic religions -- Judaism, Christianity and Islam. Why government included Christianity and left other two? Why have you excluded Sri Lankan Hindus and Bhutani Christians?" He also asked why only religious persecution? "Are people not persecuted for political reasons? Are people not persecuted on linguistic ground? Are people not persecuted from unleashing war within their country?"  He stressed that the Bill violates the fundamental principle of Article 14 of the Constitution.

The Congress member stressed that somebody has to take responsibility to answer these questions, daring Shah to lay opinion of law ministry before the House.