Modi ji has said farmers’ income would be doubled from January 1, so will ask him how it would be done: Rakesh Tikait 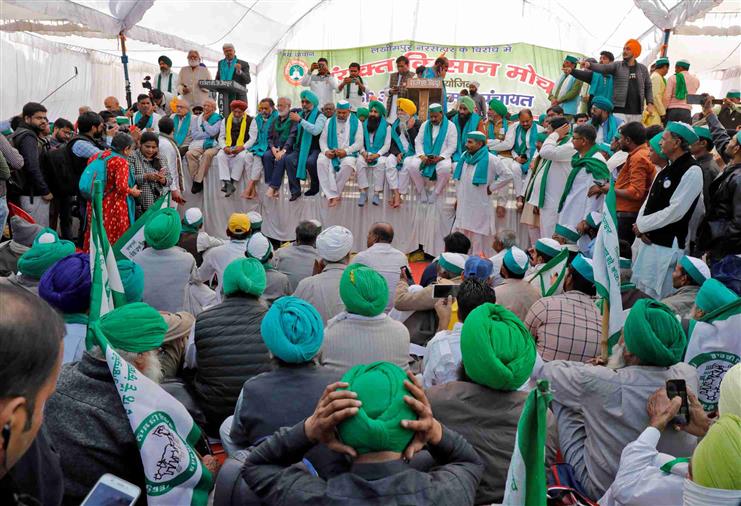 Farmers listen to a speaker as they attend a mass rally to demand minimum support prices be extended to all produce, in Lucknow. Reuters

Terming the Union Cabinet’s approval of a bill repealing the farm laws on Wednesday a mere “formality”, farmer leaders said now they want the government to resolve their other pending demands, most importantly the legal guarantee for minimum support price (MSP).

However, they welcomed the move and said that this is only the first victory for the protesting farmers and they will continue their ongoing agitation.

“Today’s cabinet approval of a bill repealing the three farm laws, of which the announcement has already been made by PM Modi, was just a formality. It is just a process. Now, what we want from the government is to take up our other demands,” Shiv Kumar ‘Kaka’ of the Rashtriya Kisan Mahasangh (RKM) told PTI.

“Ideally, after they finally decide to repeal the laws they should have had another round of talks with us during which we would have discussed the MSP issue as well. This way the government could have gone ahead with both the bills—repealing of farmer laws and legalising MSP—simultaneously,” he added.

The Samyukta Kisan Morcha (SKM), a joint body of farmer unions leading the current protests, on Sunday wrote to the prime minister urging him to immediately resume talks on the farmers’ six demands, including legal guarantee to procurement of crops at MSP.

The other demands include sacking and arrest of Union Minister of State for Home Ajay Mishra in connection with the Lakhimpur Kheri incident, withdrawal of cases against farmers and building of a memorial for those who lost their lives during the agitation.

Bharatiya Kisan Union leader Rakesh Tikait, in his tweet on Wednesday, clarified that the farmers’ movement is far from over and said he will call it farmers’ victory only when they’ll start getting the right prices for their crops.

“This protest will not end yet. We have a meeting on November 27 after which we will take further decisions. (Prime Minister Narendra) Modi ji has said farmers’ income would be doubled from January 1, so will ask him how it would be done. Farmers’ victory will be ensured when they get the right price for their crops,” Tikait tweeted in Hindi.

Another farmer leader Kavita Kuruganti called the Union Cabinet nod a “logical step” in the whole process of tabling the bill in the Parliament, which she claimed “doesn’t hold any more significance than what they have already stated on November 19”—the day when the prime minister made the announcement of repealing the laws.

“The cabinet approval is a logical step. It doesn’t hold any more significance than what we have already stated on November 19. The repeal of these bills is of course a welcoming development but this is only the first victory for the protesting farmers. We will wait for the other demands to be addressed,” said Kuruganti, who is also a member of the SKM.

The farmers, in their list of demands, have also sought removal of penal provisions on farmers in the “Commission for Air Quality Management in the National Capital Region and Adjoining Areas Act 2021” and withdrawal of the draft “Electricity Amendments Bill, 2020/2021” proposed by the government.

However, for farmer leader and representative of the Rashtriya Kisan Majdoor Sabha Abhimanyu Kohar the cabinet approval to repeal of the three anti-farmer laws is a “big day” as it makes the government’s stand “official”.

“This is a welcome step, and a big day for not only our movement but for democracy as well. Because don’t forget this was a fight for democratic rights as well. Our victory gives stamp of approval to the Gandhian way of non-violent movement where people from every caste, creed, sex and religion participated. That said, our stand is clear and we’ll continue fighting till all our demands are not met,” he said.

The three laws to be repealed are: Farmer’s Produce Trade and Commerce (Promotion and Facilitation) Act; The Farmers (Empowerment and Protection) Agreement of Price Assurance and Farm Services Act; and The Essential Commodities (Amendment) Act.

These laws, passed in September last year, had triggered widespread protests by thousands of farmers mainly from Punjab, Haryana and western Uttar Pradesh at Delhi borders.

The protest started at the fag-end of November 2020, and is still continuing. PTI