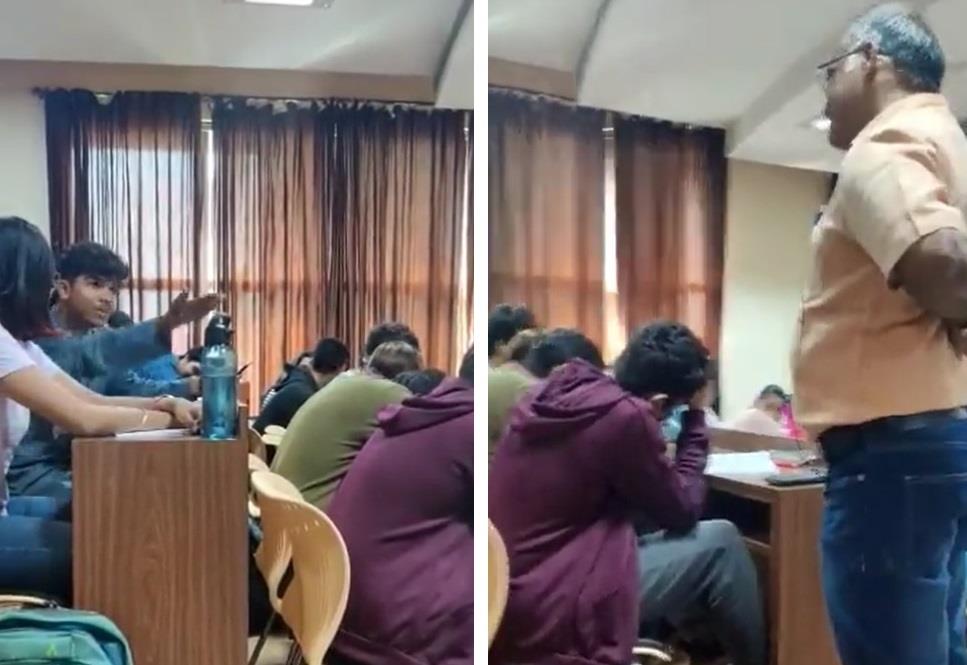 The college has debarred the professor from taking classes till the inquiry is over. A video grab

A professor of a private university at Manipal in Udupi district has been suspended after a video of him calling a Muslim student by a terrorist’s name went viral on the social media.

The student and the professor of the Manipal Institute of Technology (MIT) sorted out the issue after the professor tendered an apology.

However, after the video of the student confronting the professor for his remark went viral on social media, the university suspended the professor and initiated a probe.

The college has debarred the professor from taking classes till the inquiry is over.

A Professor in a class room in India calling a Muslim student ‘terrorist’ - This is what it has been to be a minority in India! pic.twitter.com/EjE7uFbsSi

In the video, the student is purportedly seen questioning the assistant professor of the department for the unsavoury comment. The professor is seen clarifying that he said it in a humorous tone.

“26/11 is not funny. Being a Muslim in this country and facing all this every day is not funny, sir,” the student retorts. “You can’t joke about my religion, that too in a derogatory manner,” he says.

The professor apologised to the student and told him he was like his son. The student further says if his father had said something like that, he would disown him. He asked the professor whether he would call his son a terrorist in front of an entire class.

Later, both the teacher and the student spoke to each other and ironed out the differences.

In a WhatsApp post which was later circulated in one of the student groups of the university, the student said, “Hello everyone, all of you must have seen a video going viral, wherein a student is telling his teacher that racist comments are not acceptable.”

“The reason behind this was him calling me by an unacceptable name, Kasab, one of the biggest terrorists this country has ever seen. It was a joke, which cannot be considered a valid-enough reason to question the identity of a human being.

However, I had a conversation with the lecturer and realised that he genuinely meant that apology, and we as a student community must let it go as a genuine mistake. I understand what was going on in his head and would like to believe he didn’t mean it. It came across wrong from a teacher, a person we admire, but it can be ignored this time. Thank you for standing with me through this. It means a lot,” the student said.