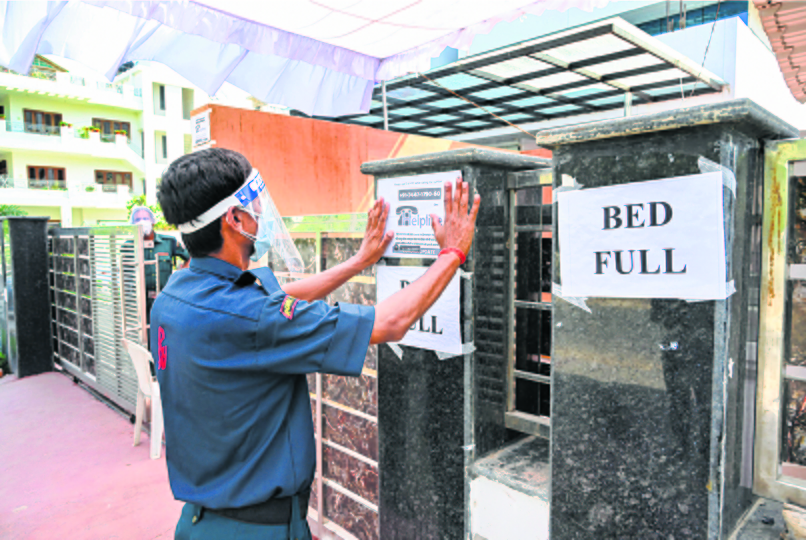 A guard pastes a “no bed” notice outside a hospital in Prayagraj. PTI

Invoking the Disaster Management Act, 2005, the Centre on Thursday directed all state governments and UT administrations to ensure uninterrupted supply of medical oxygen across the country.

Panipat: A truck filled with medical oxygen went missing while on its way to Sirsa from the Air Liquid Naphtha Cracker Complex here on Wednesday evening. A case has been filed. TNS

It said: “No restriction shall be imposed on the movement of medical oxygen between the states. Transport officials shall be instructed to allow free inter-state movement of such vehicles. No authority shall attach the oxygen carrying vehicles passing through the districts or areas for making supplies specific to any particular district or area.”

The directive under the stringent Act was issued by Union Home Secretary Ajay Bhalla in the wake of reports that some states blocked supply of medical oxygen to other states amid a sudden spike in Covid cases. Those found violating the order will face punishment up to one year of jail or fine or both.

Bhalla said the district administrative and police heads would be “personally liable” for implementation of the directives. — TNS

India's decision allowing 5G trials without Chinese companies a sovereign one: US

America is deeply concerned about the dangers of installing ...