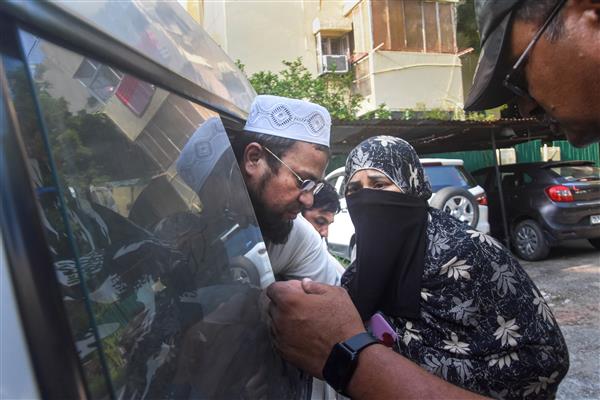 An accused detained during a raid by Special Cell of the Delhi Police for his alleged association with Popular Front of India (PFI), at Amar Colony police station, in New Delhi on September 27, 2022. PTI

The government on Wednesday banned Popular Front of India and several of its associates for five years under a stringent anti-terror law, accusing them of having “links” with global terror groups like ISIS.

More than 150 people allegedly linked with PFI were detained or arrested in raids across seven states on Tuesday, five days after a similar pan-India crackdown against the 16-year-old group had led to the arrest of over a hundred of its activities and seizure of several dozen properties.

In a late Tuesday night notification, the Union Home Ministry said some PFI founding members are leaders of the Students Islamic Movement of India (SIMI) and the PFI has linkages with Jamat-ul-Mujahideen Bangladesh (JMB). Both JMB and SIMI are proscribed organisations.

It said there had been many instances of international linkages of PFI with global terrorist groups such as the Islamic State of Iraq and Syria (ISIS).

PFI and its associates or affiliates or fronts have been working covertly to increase the radicalisation of one community by promoting a sense of insecurity in the country, which is substantiated by the fact that some PFI cadres have joined international terrorist organisations, the notification claimed.

“Whereas, the Central government, having regard to the above circumstances, is of the firm opinion that it is necessary to declare PFI and its associates or affiliates or fronts association outlawed with immediate effect, and accordingly, in exercise of the powers conferred by the proviso to sub-section (3) of section 3 of the said Act, declares it as outlawed,” it said.

Chief Ministers of Uttar Pradesh, Karnataka, Maharashtra and Assam welcomed the decision, saying PFI was posing threat to the country’s unity and integrity.

The opposition Congress in Kerala and its coalition partner Indian Union Muslim League (IUML) also welcomed the Centre’s move, but said the RSS should also be similarly outlawed.

Strongly condemning the activities of the PFI, senior IUML leader M K Muneer said the radical outfit had misinterpreted the Quran and persuaded the community members to adopt the path of violence.

PFI not only tried to mislead the young generation but also tried to create division and hatred in the society, he said.

The home ministry claimed that PFI and its associates or affiliates or fronts have been involved in violent terrorist activities with an intent to create a reign of terror in the country, thereby endangering the security and public order of the state.

PFI, the notification alleged, is encouraging and trying to enforce a terror-based regressive regime, continue to propagate anti-national sentiments and radicalising a particular section of society to create disaffection against the country, aggravating activities which are detrimental to the integrity, security and sovereignty of the country.

The home ministry claimed investigations have established clear linkages between PFI and its associates or affiliates or fronts.

It said Rehab India Foundation collects funds through PFI members. Some PFI members are also members of Campus Front of India, Empower India Foundation, and Rehab Foundation, Kerala. The activities of Junior Front, All India Imams Council, National Confederation of Human Rights Organisation and National Women’s Front are monitored/coordinated by the PFI leaders, the notification claimed PFI created these associates or affiliates or fronts to enhance its reach among different sections of the society such as the youth, students, women, imams, lawyers or weaker sections of the society to expand its membership, influence and fund-raising capacity, it said.

The home ministry said these associates or affiliates or fronts have a ‘hub and spoke’ relationship.

The PFI and its associates or affiliates or fronts operate openly as socio-economic educational and political organisations. But they have been pursuing a secret agenda to radicalise a particular section of the society, working towards undermining the concept of democracy and showing sheer disrespect towards the constitutional authority and constitutional setup of the country, it alleged.

Investigations in various cases have revealed that PFI and its cadre have been repeatedly engaging in violent and subversive acts, the ministry claimed.

Criminal violent acts carried out by PFI include chopping off the limbs of a college professor, killings of persons associated with organisations espousing other faiths, obtaining explosives to target prominent people and places and destruction of public property, it said.

The notification also mentioned the names of several people who were alleged victims of the PFI’s “brutal” violence and most of them belong to Kerala, Karnataka and Tamil Nadu.

The home ministry said there had been many instances of PFI’s linkages with global terrorist groups and some activists of its PFI have joined ISIS and participated in terror activities in Syria, Iraq and Afghanistan.

Some of these PFI cadre were killed in these conflict theatres and some have been arrested by state police and central agencies, the Centre claimed.

The home ministry claimed the office bearers and cadre of PFI along with others are conspiring and raising funds from within India and abroad through banking channels, hawala and donations among others as part of a “well-crafted criminal conspiracy”, and then transferring, layering and integrating these funds through multiple accounts to project them as legitimate and eventually using these for various criminal, unlawful and terrorist activities in India.

The sources of deposits on behalf of PFI with respect to its several bank accounts were not supported by the financial profiles of the account holders and the activities of PFI were not being carried out as per their declared objectives. Therefore, the Income Tax Department cancelled the registration granted to PFI under section 12A or 12AA of the Income Tax Act, 1961 (43 of 1961), it said.