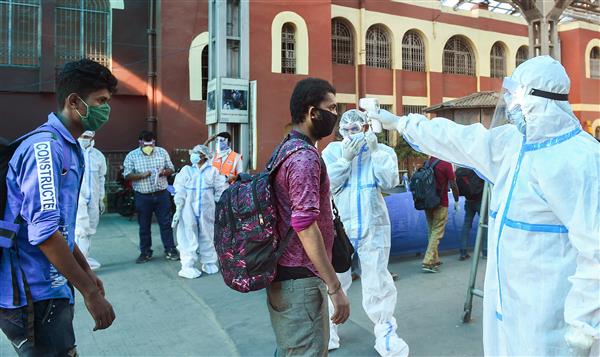 Migrant labourers undergo thermal screening as they arrive at Howrah station in a special train from Mumbai, during the ongoing nationwide COVID-19 lockdown, in Kolkata on May 17, 2020. PTI photo

The government on Sunday extended the COVID-19 induced lockdown for a further period of two weeks till May 31, as the new guidelines authorise state and Union Territory governments to have the power of delineation of red, orange and green zones while keeping in mind the parameters shared by Union Health Ministry.

The new guidelines has done away with the categorization of hotspots in the containment zones and its place it has created a new category of “buffer zone” and defined it to be an area “where new cases are more likely to appear” and so “more caution needs to be exercised”.

According to the guidelines for Lockdown 4.0, issued by the Ministry of Home Affairs (MHA), a number of activities will continue to remain prohibited throughout the country.

They include all domestic and international commercial passenger flights and Metro rail services.

Even running of schools, colleges, educational and training/coaching institutions; hotels, restaurants and other hospitality services will remain prohibited all across the country.

Among the permitted activities the highlight of the guidelines is opening of sports complexes and stadia, but only for sports activities, as spectators will not be allowed in these complexes.

In the guidelines the MHA asked district authorities to advise individuals to install the “Aarogya Setu” application on compatible mobile phones and regularly update their health status on the app.  “This will facilitate timely provision of medical attention to those individuals who are at risk,” it said.

Further the MHA has categorically mentioned the guidelines that all other activities will be permitted “except those which are specifically prohibited”, but in containment zones, “only essential activities shall be allowed”, as mentioned earlier.

It, however, said, “States/UTs, based on their assessment of the situation, may prohibit certain other activities in the various zones, or impose such restrictions as deemed necessary.”

Activities continue to be prohibited throughout the country

Changes from the previous lockdown in terms activities allowed