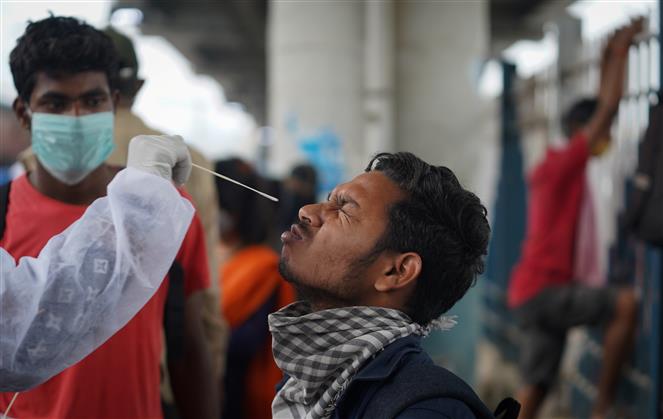 A health worker collects a swab sample from a man during a rapid antigen testing campaign for the coronavirus disease, at a railway station in Mumbai. Reuters

After the Maharashtra government revised the guidelines on quarantine for international passengers in view of concerns over the Omicron variant, the Centre on Wednesday asked the state to align its order with the SOPs issued by the Union Health Ministry.

Maharashtra has mandated seven-day institutional quarantine for travellers arriving in the state from ‘at-risk’ countries under the guidelines issued by the State Disaster Management Authority on Tuesday night.

Such passengers will also undergo-PCR test on the second, fourth and seventh day of arrival. If found to be Covid-19 positive, the passenger will be shifted to a hospital.

In case the test is negative, the passenger will still have to undergo seven-day home quarantine.

Union Health Secretary Rajesh Bhushan, in a letter, said that the order issued by the Maharashtra government is in divergence with the Covid-19 SoPs and guidelines issued by Union Health Ministry for international passengers.

“I would also advise that such modified orders of the state government are given wide publicity to obviate any inconvenience to travellers,” he said in the letter addressed to Pradeep Kumar Vyas, Additional Chief Secretary of the state’s Department of Health & Family Welfare.

Under the new guidelines issued by the Union Health Ministry on November 28, passengers originating or transiting from at-risk countries will have to undergo-PCR testing post-arrival and will be required to wait for the results at the airport before leaving or taking a connecting flight.

Travellers from countries excluding those countries at risk will be allowed to leave the airport and shall self-monitor their health for 14 days post-arrival but five per cent of the total flight passengers shall undergo post-arrival testing at random at the airport on arrival.

The list of ‘at-risk’ countries has been announced by the Union government.