'Any overzealous, though well-meaning judicial intervention may lead to unforeseen and unintended consequences' 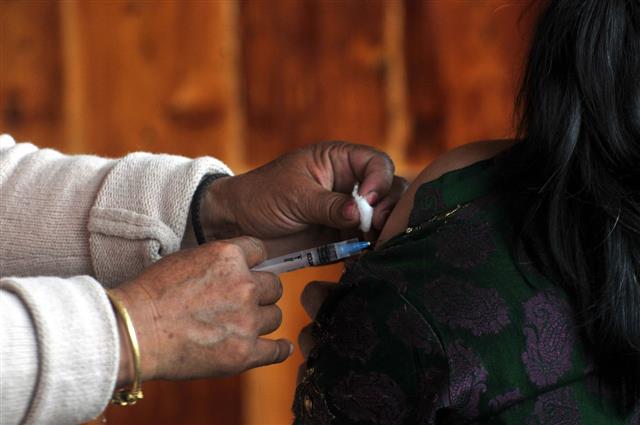 In a late-night affidavit submitted in the Supreme Court, the Centre defended its Covid vaccination policy, which has been criticised for differential pricing, shortage of doses, and slow rollout.

The Centre added that the price factor will not have any impact on the ultimate beneficiary namely, the eligible person getting the vaccine since all state governments have already declared their policy decision that each state will be administering the vaccine to its residents, free of cost.

Urging against judicial interference on its vaccine policy, the Centre's Sunday night affidavit said: "Any overzealous, though well-meaning judicial intervention may lead to unforeseen and unintended consequences, in absence of any expert advice or administrative experience, leaving the doctors, scientists, experts and executive very little room to find innovative solutions on the go." The Centre said it is most respectfully submitted that in the times of such grave and unprecedented crisis which the nation is fighting the disaster of an unprecedented magnitude, the executive functioning of the government needs the discretion to formulate policy in the larger interest.

"It is submitted that in view of the unprecedented and peculiar circumstances under which vaccination drive is devised as an executive policy, the wisdom of the executive should be trusted," said the affidavit.

The affidavit said with a view to ensuring that there is no disparity between the states inter-se, with active consultation of the Centre with both the manufacturers, the central government has successfully fixed uniform price to be paid by all the State Governments.

Defending its vaccine policy, the affidavit said: "The policy is framed as above which is just, equitable, non-discriminatory and based upon an intelligible differentiating factor between the two age groups (45 plus and below)." The affidavit added: "This policy thus, conforms to mandate of Article 14 and Article 21 of the Constitution of India and is made after several rounds of consultation and discussion with experts, State Government and vaccine manufacturers requiring no interference by this Court as while dealing with a pandemic of this magnitude, the Executive does have a room for free play in the joints, in larger public interest." The Centre said the policy was framed keeping in mind limited availability of vaccines, the vulnerability of age groups, and the fact that vaccinating the entire country was not possible in one go due to the suddenness of the pandemic, as the prime considerations.

The Centre emphasized that it is ensured that the pricing of vaccine is also not only reasonable but uniform throughout the country removing any possibility of one citizen in one state getting the vaccine at a higher price as compared to a similarly situated resident residing in another state.

"Due to consultations and "persuasion" by the Central Government both the manufacturers of vaccine, Bharat Biotech and SII, have declared their respective prices which are uniform for all State Governments," added the affidavit.

A bench of Justices D.Y. Chandrachud, L. Nageswara Rao and S. Ravindra Bhat will take up the matter arising out of a suo motu case, later Monday.

The affidavit added that the new 'Liberalized Pricing and Accelerated National Covid-19 Vaccination Strategy would further ramp up the pace of COVID-19 vaccination." "It aims at liberalized vaccine pricing and scaling up of vaccine coverage to incentivize vaccine manufacturers to rapidly scale up their production and to attract new vaccine manufacturers. It would make pricing, procurement and administration of vaccines more flexible and ensure augmented vaccine production as well as wider availability of vaccines in the country", said the affidavit.

The Centre submitted that two vaccines are currently part of the vaccination drive since January 2021. Another COVID-19 vaccine, Sputnik V developed by Gamaleya Institute, Russia and distributed in partnership with Dr Reddy's Laboratories, has received Emergency Use Authorization by the National Regulator in April 2021 and would be available now. Many other candidates are in the late stages of clinical trials and, therefore, expected to receive 50 necessary approval that would further increase the availability of vaccines.

On April 30, the top court while hearing a suo moto matter in connection with Covid-19 management issues, had called for revisiting the Centre's vaccine policy. The top court had remarked that the manner in which the current policy has been framed would prima facie result in a detriment to the right to public health, which is an integral element of Article 21 of the Constitution.

"Sometimes, steps that are taken for immediate needs, to tide over an imminent crisis, may turn out to be imprudent in a long run. However, they need to be appreciated, understood and acknowledged, keeping in mind the complete strategy and policy and holistic picture of immediate-, medium- and long-term needs, while also retaining the capacity to remain dynamic to deal with an ever-mutating virus, whose exact graph cannot be predicted with accuracy and continuous upgradation of knowledge pool with further experience and research," added the affidavit.

The Centre said both manufacturers (one an Indian company and second a licensee of a British company) have taken the financial risk in developing and manufacturing these vaccines and it is prudent to take decisions on pricing through negotiations in a transparent consultative process keeping statutory provisions as a last resort under the present circumstances.