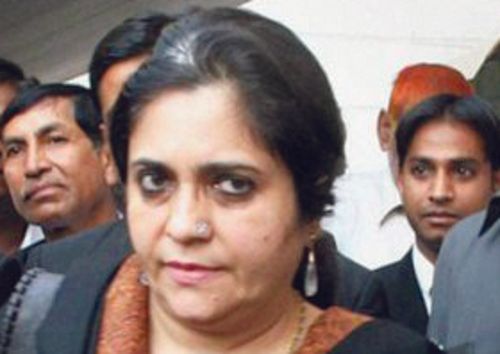 Activist Teesta Setalvad conspired to create false cases against then Gujarat CM Narendra Modi, his Cabinet colleagues and senior BJP leaders in connection with the 2002 post-Godhra riots, a chargesheet filed by an SIT in a court here on Wednesday claimed.

The SIT of the Ahmedabad police filed the chargesheet against Setalvad, retired Director General of Police RB Sreekumar and former IPS officer Sanjiv Bhatt in a case of alleged fabrication of evidence in connection with the 2002 riots. It also accused Setalvad of working with Congress leaders to spread "misunderstanding" among riot victims that Gujarat was not safe for them.

The Ahmedabad crime branch had registered the case against Setalvad and the other two days after the Supreme Court in June upheld the clean chit given to Modi and 63 others in response to a petition filed by Zakia Jafri alleging larger conspiracy behind the 2002 violence.

AK Malhotra, a member of the Special Investigation Team appointed by the Supreme Court to look into the riots cases who had questioned Modi, is also among the witnesses.

Among the documentary evidence in the chargesheet are a copy of the complaint filed by Zakia Jafri in June 2006 in which she had accused 63 persons, including Modi, of wilful dereliction of duty in preventing the riots.