China high on agenda in Jaishankar's US visit : The Tribune India

China high on agenda in Jaishankar's US visit 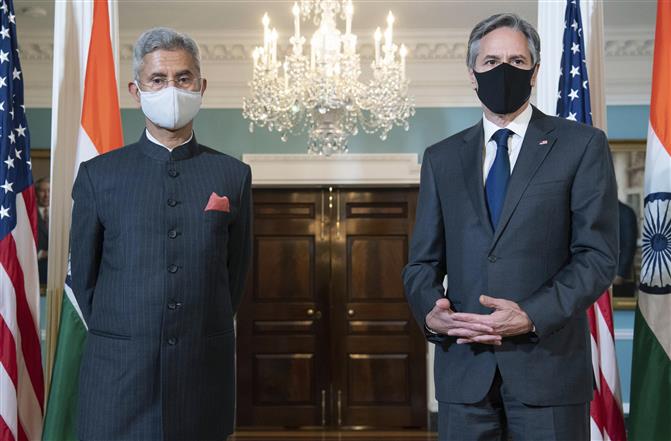 The partnership between the US and India is vital, strong and increasingly productive, said US Secretary of State Antony Blinken while listing the Sino-India border situation as one of the major topics discussed with External Affairs Minister S Jaishankar during his visit to Washington.

Security issues were high on Jaishankar’s US visit and the Quad, the US-India defence partnership itself, Afghanistan and Myanmar were the common ground he covered with US Defence Secretary Lloyd Austin and NSA Jake Sullivan. The subject also figured in the External Affairs Minister’s engagements with US lawmakers.

US and India united in tackling Covid-19: Secretary of State Blinken

Sullivan, in his meeting with Jaishankar, reaffirmed the Biden Administration’s commitment to deepening the US-India partnership and discussed a broad range of issues, including Covid relief, efforts to strengthen Indo-Pacific cooperation through the Quad, and a shared commitment to combating the climate crisis and enhancing multilateral cooperation, including at the UNSC, said the US State Department spokesperson Ned Price.

Jaishankar had travelled to the US against the backdrop of his stalemated conversation with Chinese Foreign Minister Wang Yi on April 30. The readouts of the two Foreign Ministries were divergent, suggesting that there was no meeting of minds on the question of disengagement in areas in Eastern Ladakh. Both sides, however, are engaged indirectly due to their common memberships of the BRICS and SCO whose summits will be hosted by India this year.

Jaishankar observed that Indo-US ties have grown stronger over the years and especially mentioned the “strong support and solidarity at a moment of great difficulty for us”.

Blinken responded by pointing out that Washington had noted that in the earlier days of Covid, India was there for the US, “something we’ll never forget, and now we want to make sure that we’re there for and with India”.