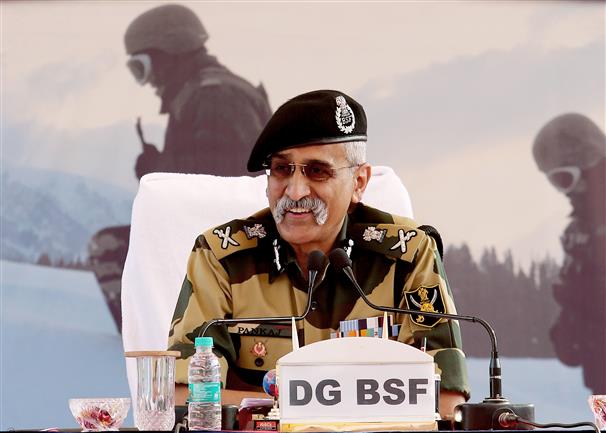 The government has sanctioned Rs 30 crore to procure surveillance cameras, drones and other monitoring gadgets for the BSF deployed to guard Indian fronts along Pakistan and Bangladesh even as it is deploying 5,500 security cameras in the front areas, the chief of the paramilitary force said on Wednesday.

The BSF DG also said the troopers had shot down 16 drones coming from across the border with Pakistan this year.

He also contended that the force’s troopers were getting “more and more” efficient in detecting and shooting down drones that fly from Pakistan into India.

Singh, however, conceded that at present, the force “does not” have a fool-proof system or solution to counter the menace posed by unmanned aerial vehicles (UAVs). “We will find solutions in the times to come and we are increasingly detecting and killing the drones,” he said.

“We have tried to enhance the surveillance in border areas in a very big way. This entails the use of surveillance cameras and drones on the western and eastern theatres (Pakistan and Bangladesh fronts, respectively),” the DG said, adding that the force had developed in-house “low-cost technology solutions”.

The solutions so developed “help the BSF to mount effective surveillance in the border areas”, he said, adding “similar tools provided by foreign vendors are very costly and hence we now have “indigenously developed low-cost sensors and surveillance devices”.

According to the BSF, 114 drone sightings were made along borders with Pakistan (both International Border and LoC) last year, while the number till November 10 this year has almost doubled to 218.

Identifying cyber security as another major challenge, the BSF DG said, “Now with 5G technology coming up, we need to be prepared to ensure that our systems are safe.”

He also cited the recent example of the ransomware attack on the servers of the AIIMS in Delhi to bring to the fore his view on the subject.

The BSF had also improved its guard along the LoC in Kashmir, the DG said, adding that 117 forward defence locations had been “reinforced” or strengthened by providing better housing infrastructure for the troops at those locations.

R-Day: Women to be part of camel contingent

Border Security Force’s camel contingent for next year’s Republic Day parade will have women along with men for the first time, Director General of the force Pankaj Singh has said. The BSF’s famed camel contingent has been a part of the Republic Day celebrations since 1976 after it replaced a similar squad of the Army. TNS