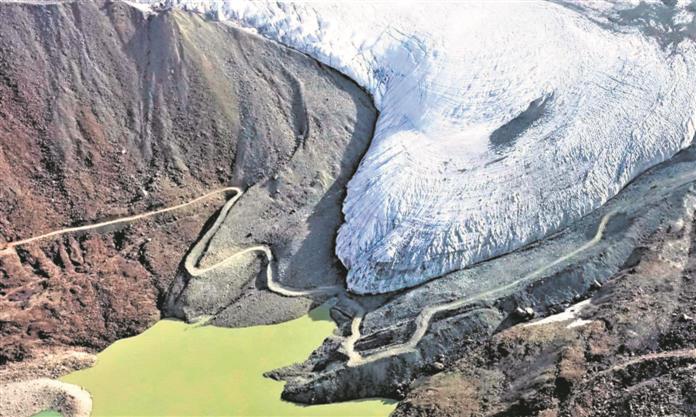 The new track between Sasoma and Saser La

An ancient caravan trade route between Ladakh and Kashgar (now in Xinjiang, China) has been revived by India as an alternative route to access the vital Sub-Sector North (SSN) in Ladakh. The Karakoram pass, Depsang plains and the airfield at Daulat Beg Oldie (DBO) are part of the SSN. 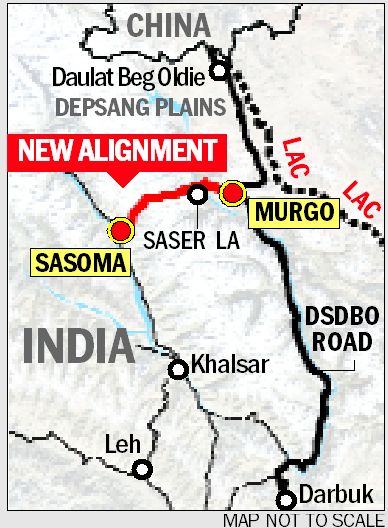 At present, these sensitive places can be accessed through the 255-km-long Darbuk-Shyok-DBO (DSDBO) road, which at several points is close to the Line of Actual Control (LAC) and thus exposed to military risk. From Ladakh’s Shyok village to Murgo (in Depsang), covering 127 km, the DSDBO road runs close to the LAC. The Galwan valley is on the same stretch. A 23-km tract of the DSDBO road from Darbuk to Shyok and 105-km stretch from Murgo to the DBO is relatively away from the LAC.

The new road alignment starts from Sasoma, near the base of Siachen Glacier, and goes eastwards across the 17,800-foot-high Saser La and then descends at Gapsam near Murgo in Depsang plains. Here, the road will join the existing DSDBO road. As of now a jeepable mud track has been created from Sasoma to Saser La. Eastwards from Saser La to Saser Brangsa (an ancient camping site with no population), the 27-km track allows just walking. Beyond that till Murgo, a jeepable track is being laid out. The entire alignment, so far, is useable only during summer months, sources told The Tribune. New Delhi is taking a call on blacktopping the entire stretch.

An all-weather road exists between Leh and Sasoma. The route eastwards of Sasoma will allow an alternative axis to the SSN in case the DSDBO road is targeted.

The route is not new, it has been a mule track for centuries. Janet Rizvi in her book “Trans Himalayan Caravans- Merchant Princes and Peasant Traders in Ladakh”, published in 1999, says trade caravans were a regular between Ladakh and Kashgar till 1937. She describes the use of the route across Saser La.

The BRO, a unit under the Ministry of Defence, has carved out the new track under trying circumstances as this is one of rugged parts of the tree-less Karakoram mountains. Temperature dips to -50°C during winter and hovers around 12°C in peak summer. The Central Road Research Institute was involved in the study on making the road across Saser La or a tunnel under it.