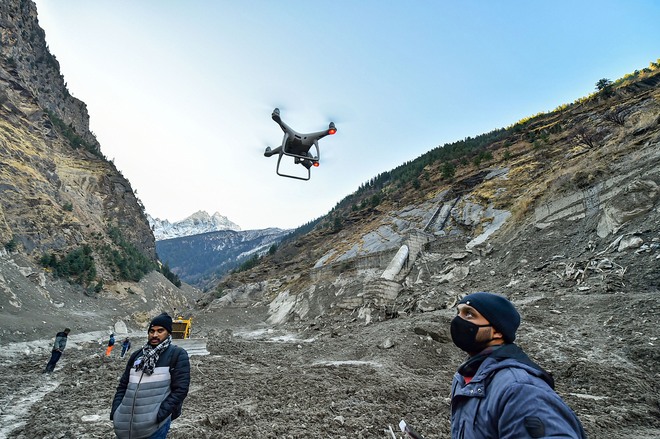 A drone survey being conducted at Raini village on Thursday. PTI

Inhabitants of Chamoli’s Raini village are finding it hard to process Mother Nature’s message. Jolted by the Sunday deluge that killed at least 32 and left 176 missing, locals are at pains to absorb the fact that floods have devastated Raini, the birthplace of Chipko movement, which originated here and went on to mother several environment campaigns in India and abroad.

Among all villages ravaged by the tragedy, Raini, situated on the banks of Dhaulaganga, has suffered the most. Large swathes of the once vibrant land stand bare reduced to smithereens by the assault of nature. Locals now say they had premonitions of a disaster.

Raini village pradhan Bhagwan Singh Reni said, “The destruction in the Chamoli region was feared long back in 2005 when the works on the Rishiganga 520 MW power project first started. In 2019, we approached the Uttarakhand High Court through a PIL alleging unfair and environmentally hazardous practices being adopted by the private company involved, but to no avail.” Villagers say they sporadically approached the Joshimath SDM and warned him against stone-crushing works in the middle of the riverbed wreaking havoc on local flora and fauna and damaging the fragile eco-space of the region. “No one heeded us. The disaster could have been averted if the authorities were responsive,” Bhagwan Singh says.