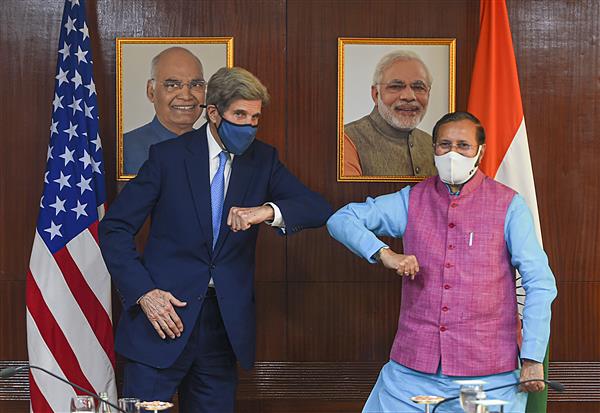 The Finance Ministry said Sitharaman discussed various issues related to climate change with Kerry and “stressed on the need for assessment of the $100 billion commitment per year from developed countries to developing countries”.

“The two sides acknowledged the strong and shared interests between India and the US to combat climate change concerns. The need for enhanced #climatefinance, technology transfer, and capacity building was also acknowledged by both sides.

Sitharaman also informed Kerry that “India is among few countries on track towards Paris Agreement goals and has taken decisive actions in fighting climate change. She emphasised that focus on climate change should be both on mitigation and on strengthening adaptation measures”.

Earlier, Javadekar said he had an “engaging and fruitful discussion” with Kerry, who is in India as part of his three-nation tour ahead of US President Joe Biden’s virtual ‘Leaders Summit on Climate’ to be held with 40 world leaders, including Prime Minister Narendra Modi, on April 22 and 23.

Javadekar said: “We discussed a range of issues including climate finance, joint research, and collaboration etc.”

Kerry is in India until April 8 and is also expected to meet Prime Minister Narendra Modi.