Colonel among 20 soldiers killed on LAC 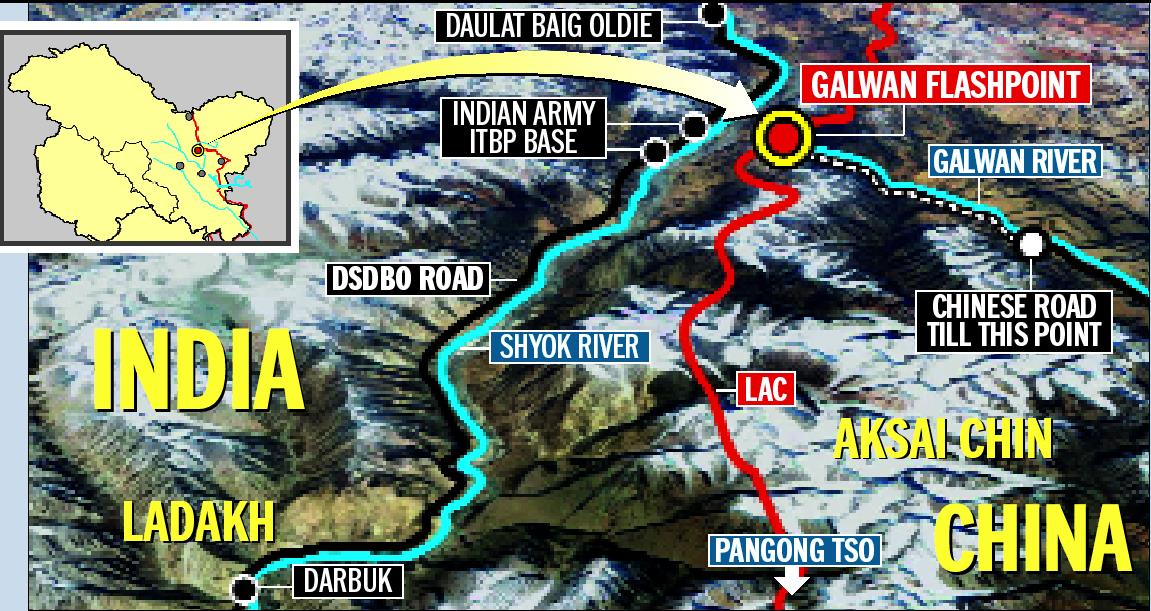 Fragile peace along the Line of Actual Control (LAC) between India and China was shattered last night with 20 Indian Army soldiers, including a Colonel, being killed in action while battling the Chinese troops at Galwan Valley in Ladakh.

Souring of the ties & Bloody face-offs in the past

The Indian Army confirmed around 10.20 pm 20 of its personnel had died. In the afternoon, the Army had announced that Col Santosh Babu, Commanding Officer of Bihar Regiment’s 16th Battalion, Havildar K Palani and Sepoy Ojha had been killed in action. Later, it said 17 others had succumbed to injuries.

More than 900 troops on each side were involved in a physical clash, which started Monday night and ended in the early hours of Tuesday. Most of the deaths occurred as soldiers during a physical fight fell off the cliff into the river in the narrow Galwan valley. While some died of hypothermia, the others due to injuries.

Stones, iron and bamboo poles with nails embed on them were used by the Chinese to attack the Indian troops. The People’s Liberation Army (PLA) also suffered fatal casualties, however, their number was not confirmed. The Indian Army categorically said “no bullets were fired in the clash”. The casualties would have been manifold had bullets been fired.

Sources said the clash occurred at an altitude of 15,000 feet. The PLA, which was in talks with the Indian Army to de-escalate the 40-day standoff, had build a fresh post and set up arctic tents at vantage points on the south bank of the Galwan river.

The post gave a clear view to the Chinese of the vital 255-km Darbuk-Shyok-Daulat Baig Oldie (DSDBO) road, India’s only link to Depsang, Murgo and Karakoram Pass. The post was 5 km from the DSDBO road, the Galwan river flows in an east-to-west direction and joins the Shyok river.

Troops noticed the fresh post near Patrol Point 14 and asked the Chinese to vacate. The number of Indian troops was higher on the spot and a clash ensued. The PLA sent in reinforcements and another clash ensued. The disengagement plan decided on June 6 at the meeting of Corps Commander level was to ask both sides to withdraw from the valley. However, PLA’s Western Theater Command spokesperson Col Zhang Shuili made a fresh claim on Tuesday, saying “China always owns sovereignty over the Galwan Valley region.” Till now, the Indian side had maintained there was no dispute at Galwan and LAC, which is not demarcated on ground, matched the Chinese claim line proposed in 1956.

More than 900 troops on each side were involved in the clash, which started on Monday night and ended early on Tuesday. Most of the deaths occurred as soldiers fell off the cliff into the river. Some died due to hypothermia while others due to injuries. The Indian Army categorically said “no bullets were fired in the clash”. The PLA also suffered fatal casualties, but was silent on their numbers.

The PLA, in talks with the Indian Army to de-escalate the 40-day standoff, built a fresh post on south bank of Galwan river giving a clear view of vital 255-km DSDBO road. The troops noticed the post near Patrol Point 14 and asked Chinese to vacate, leading to the clash, say sources.

The Chinese Foreign Ministry said: “Indian troops crossed the border and launched provocative attacks against Chinese personnel. The Chinese side has lodged a strong protest and solemn representation.”

United Nations Secretary-General Antonio Guterres has expressed concern over the violence and deaths at the LAC and urged both sides to exercise “maximum restraint”, his spokesperson said on Tuesday.