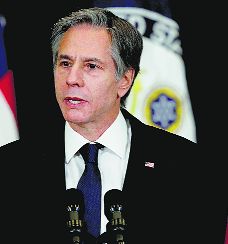 US Secretary of State Tony Blinken

The third ministerial meeting of the Quad grouping was held in virtual mode at the initiative of the new Biden administration today.

“The Quad is emerging as a critical piece of the Indo-Pacific geopolitical fabric. Great to see Secretary Blinken leading so early in the new administration,” said strategic analyst Abraham Denmark.

“It was important for the international community that the direction of changes remains positive and beneficial to all,” noted an Indian read-out of the virtual meeting that was attended by Foreign Ministers S Jaishankar, Marise Payne (Australia), Toshimitsu Motegi (Japan) and Antony Blinken (US).

The discussions on regional issues included a reiteration of their common vision for a free, open and inclusive Indo-Pacific region, with clear support for ASEAN cohesion and centrality. “It was noted that the Indo-Pacific concept had gathered growing international support, including in Europe,” added the read-out.

In discussion pertaining to Myanmar, India reiterated the need to uphold the rule of law and democratic transition. “Noting that regular Quad consultations hold value, the ministers agreed to continue these useful discussions,” said the MEA.

Meanwhile, Jaishankar will visit Maldives and Mauritius next week. In Maldives, he will review bilateral ties and progress of ongoing bilateral projects, besides holding discussions on the pandemic situation.