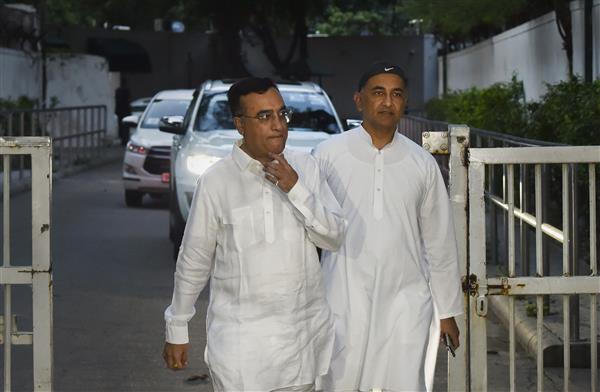 The Congress on Tuesday continued to grapple with the political crisis in Rajasthan after the party observers termed as "indiscipline" the action of 82 MLAs in the state setting conditions to the party leadership for appointing Ashok Gehlot's successor.

The two observers Mallikarjun Kharge and Ajay Maken are preparing a written report on the developments in Rajasthan and are likely to submit it by the evening.

All eyes will be on Sonia Gandhi on what action she recommends after getting the written report. She had on Monday asked them to submit the written report to her, after Kharge and Maken apprised her of the developments in Rajasthan.

Sources said the observers' report may recommend disciplinary action against those behind the move of holding a parallel meet and not allowing a meeting of the Congress Legislature Party (CLP) in Jaipur and termed their action as "gross indiscipline".

The party is also contemplating dropping Ashok Gehlot as the candidate for the party president to succeed Sonia Gandhi and is considering some other names.

"Congress is only party with a well-established process to elect its President, which is free & transparent. Today, Chairman of our Central Election Authority Madhusudan Mistry, presented to Smt. Sonia Gandhi the final list of delegates of electoral college and her QR coded voter ID card," said party general secretary communications, Jairam Ramesh.

Mistry after meeting Sonia Gandhi told reporters that Shashi Tharoor's representative has informed him that the Thiruvananthapuram MP may submit his nomination form on September 30.

He also informed that party treasurer Pawan Bansal has taken a set of two forms for the party president's election, which are likely for someone else.

The sources said the set of forms may be filled for the official candidate who has the backing of the present dispensation in the party.

Former Madhya Pradesh chief minister Kamal Nath also left for Bhopal and is unlikely to intervene to resolve the current crisis in Rajasthan.