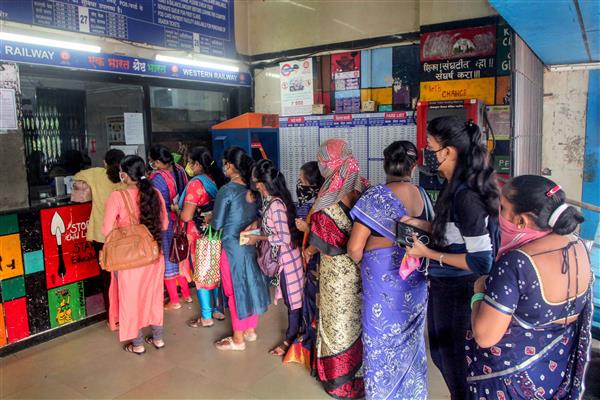 Women passengers stand in a queue to buy tickets after at Borivali Railway Station in Mumbai. PTI

The Congress on Wednesday accused the railways of charging higher fares for festival special trains and urged the government to roll back the raised prices to help people during the festive season.

Congress spokesperson Gaurav Vallabh said the government has approved 196 pairs or 392 trains to cater to the festival rush and they will operate from October 20 to November 30 for festivals such as Durga Puja, Dussehra, Diwali and Chhatt Puja. He said the fares being charged for these special trains are 25 to 30 per cent higher than normal.

“We demand that the government roll back these increased fares immediately and subsidise them further so that rail travel becomes accessible to the common man and the festive travel doesn’t make a deep hole in his pocket,” he told reporters.

The railways has always been symbolic of the common man and has been called the backbone of Indian travel landscape, he said, adding that it has the potential to help the common man travel without being a burden on the pockets.

Vallabh said COVID-19 has dealt a severe blow to the earnings of many people and during the festive season people are looking forward to spread happiness and enjoy with their families.

“But the government seems to be ignorant of its role of supporting people in enjoying the festivities. Instead, the fares are on average 25-30 percent higher in the festival special trains,” he alleged.

Vallabh said with millions of people having lost their jobs in the last few months, the government, instead of providing festival stimulus, has decided to further pull the common man down.

He said there is no reason to increase the fares in current times and on the contrary the fares should have been subsidised heavily as people are already reeling due to the lockdown and downturn in the economy.

“Does the government want to push even the railways out of grasp of the common man,” he asked.

The Congress leader also asked what was the rationale of the government in increasing fares to the extent of 25 to 30 per cent.

“When across sectors there are massive retrenchments and salary cuts, GDP growth for Q1 FY21 is at -23.9 per cent, at this point of time, instead of giving money in the hands of the people, why is the government taxing the common man further,” he asked. — PTI