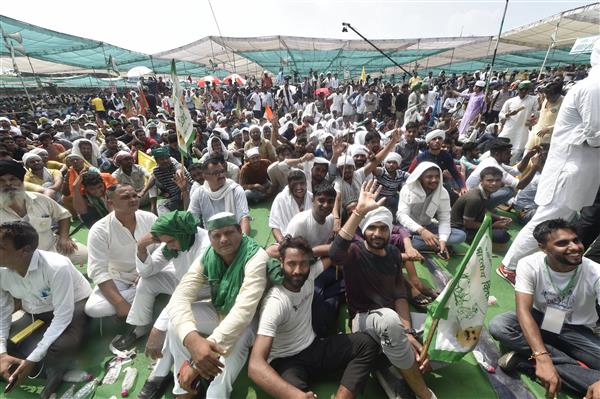 The Congress on Sunday voiced support for the ‘kisan mahapanchayat’ in Uttar Pradesh’s Muzaffarnagar with party leader Rahul Gandhi saying the call of truth is echoing and an “unjust government” will have to listen.

Congress general secretary Priyanka Gandhi Vadra said that the “arrogance of power” cannot withstand the roar of the farmers.

Thousands of farmers from Uttar Pradesh and neighbouring states on Sunday gathered in Muzaffarnagar for the ‘kisan mahapanchayat’ aimed at what they called “saving the country”, just months ahead of the crucial Uttar Pradesh assembly polls.

The event was organised by the Samyukt Kisan Morcha (SKM) at the Government Inter College ground in Muzaffarnagar in protest against the Centre’s contentious farm laws.

“The call of truth is echoing. You have to listen, unjust government!” Rahul Gandhi tweeted in Hindi.

Priyanka Gandhi also voiced support for the mahapanchayat, saying, “Farmers are the voice of this country. Farmers are the pride of the country. Arrogance of any power cannot withstand the roar of the farmers.”

The whole country is with the farmers in the fight to save agriculture and in demanding their dues in lieu of their hard work, the Congress general secretary said.

Voicing support for the mahapanchayat, senior Congress leader Sachin Pilot expressed confidence that the mahapanchayat organised under the leadership of the Samyukt Kisan Morcha will prove to be giving strength to the farmers’ interests.

“May this mahapanchayat prove to be a milestone in the direction of a peaceful farmers’ movement,” Pilot said in a tweet in Hindi.

The Samyukt Kisan Morcha, an amalgam of several farmer unions, has been spearheading the agitation against the farm laws since last year.

The government has insisted that these laws have given farmers new opportunity to sell their produce and rejected the criticism that they are aimed at doing away with the minimum support price regime and farm mandis. PTI