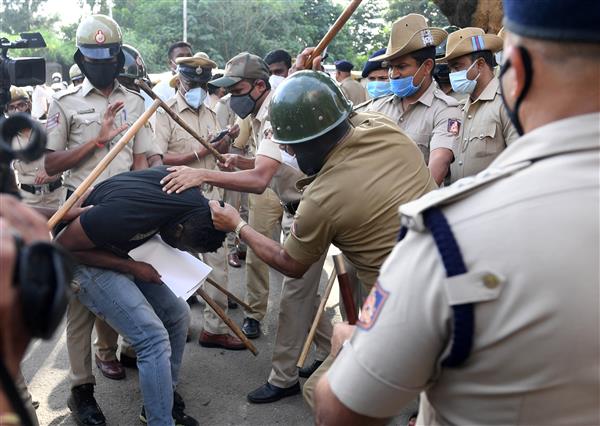 Police baton charges on a protester during a protest over the death of Joel Shindani Malu, a Congolese man detained by police for possessing of MDMA drug, in Bengaluru on Monday. PTI photo

Pant said Malu complained of chest pains and was moved to a private hospital where he died.

Pant said he’d ordered a CID inquiry into the incident.

Later in the day, a group of foreign nationals gathered near the police station to protest against the death, Pant said.

PTI quoted police as claiming Shindani, who was a student in the city, was detained for possessing 5 gm of Ecstasy pills.

Six other Congolese were detained in the violence that sparked after they staged a protest in front of the police station, IANS said in its report.

Reuters quoted The Hindu newspaper as saying they were members of the "Pan African Federation", a group set up to protect the rights of African students and professionals in the city. As his compatriots came to know about the incident, they gathered before the police station to protest, alleging Shindani died due to police brutality.

All efforts to convince them went in vain and the police undertook a baton charge to disperse them but the protestors retaliated and in the scuffle, many policemen were injured, police claimed.

Additional Commissioner of Police Soumendu Mukharjee, who rushed to the spot, said:  "Sub-Inspector Raghupathy had, on a tip-off, arrested Shindani when he came to sell drugs. The police have recovered the material and sent it for testing. One person managed to escape and another was arrested. When he was brought to the police station he did not divulge any details. He had not given any documents.

"Later, he developed chest pain at the police station. He was immediately shifted to nearby Chirayu hospital. Though he was treated, he died after an hour. To ascertain his identity, the police had to contact their (Congolese) association. When the documents were obtained, it was found that his visa had expired in 2015 and his passport had expired in 2017. No other document was available."  Further procedures are being conducted, as per the National Human Rights Commission's guidelines, into the incident, he said.