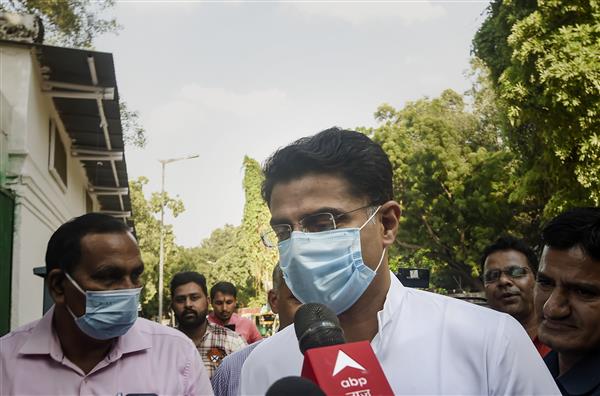 The shadow of Rajasthan crisis continued to loom over the election for the post of Congress president with the party on Tuesday issuing show-cause notices to three Ashok Gehlot loyalists, including two ministers. Their replies have been sought within 10 days, failing which disciplinary action could be taken.

Mistry met Sonia and gave her the electoral roll for the party chief’s poll and her QR-coded ID card for the poll. Only Pradesh Congress Committee delegates with valid ID cards will get to vote in the October 17 poll.

The notices followed submission of a report by AICC observers Mallikarjun Kharge and Ajay Maken to party president Sonia Gandhi. In the report the observers said Rajasthan CM Gehlot knew of the CLP meeting.

They however did not recommend any action against Gehlot, a development that led some leaders to believe that Gehlot could may run for Congress chief post even though he had clarified that his heart was in the state.

The notices say that a parallel MLAs’ meeting “confused the MLAs” and constituted “indiscipline”.

The arrival of Gehlot’s potential replacement Sachin Pilot in Delhi today also intensified speculation that Sonia Gandhi might be trying to broker truce between the two.

She, meanwhile, initiated consultations on the Rajasthan crisis and Congress presidential poll as both are interlinked due to Gehlot’s anticipated bid for the top party position.

Sonia will meet veterans AK Antony and Sushil Kumar Shinde on Wednesday amid talks that a fresh set of AICC observers might be deputed to Rajasthan to resolve the crisis and save the party’s face. The timing of such deputation remains unclear though.

Meanwhile, the names of Kharge, Mukul Wasnik, Digvijay Singh, Kamal Nath and Pawan Bansal kept doing the rounds for the top post today. Digvijay Singh, Nath, Ambika Soni and Bansal ruled themselves out of the race.

Bansal’s name surfaced after he collected two forms from the office of Madhusudan Mistry, chairman of the party’s Central Election Authority.

Bansal later clarified he had collected the papers for Chandigarh PCC leaders who wanted to keep the forms ready for proposing and seconding the party presidential poll candidate. I am not in contention, said Bansal.