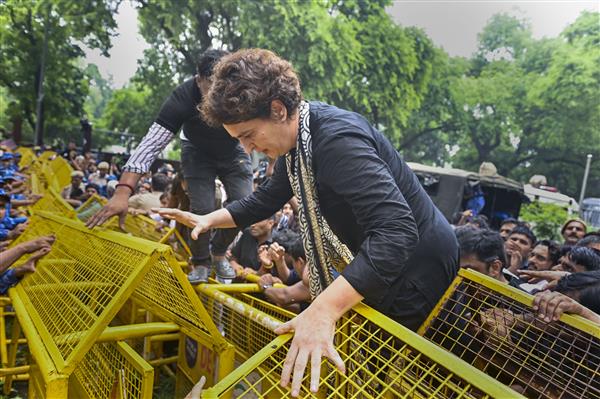 Today, there is no democracy in India. There is dictatorship. We want to raise issues of unemployment, price rise and social disharmony but we are not allowed to speak in Parliament. We are arrested. — Rahul Gandhi, Congress Leader

There is no democracy, there is dictatorship...We aren’t fighting a party but the entire infrastructure which is with one party. Rahul Gandhi, Congress leader

Stop demeaning the institutions of the country... If people don’t listen to you why are you blaming us? Ravi Shankar Prasad, Ex- Union Minister

“Today, there is no democracy in India. There is dictatorship. We want to raise issues of unemployment, price rise and social disharmony but we are not allowed to speak in Parliament. We are arrested,” Rahul said at the AICC headquarters before party leaders started the agitation from Parliament House around 11.30 am.

Rahul said all institutions in the country were under the control of the RSS.

“Hitler also used to win elections. He had the entire institutional structure with him. Give me the power of the institutions and I will show you how elections are won…Today we are not fighting a party. We are fighting the entire infrastructure of the country which is with one party,” Rahul said, with BJP leader Ravi Shankar Prasad asking why he was blaming the institutions for his own electoral failings.

On BJP accusations that the price rise debate was only a front to speak for the Gandhi family facing ED heat in the National Herald case, Rahul said, “Question me all you want but everyone knows the truth (of the ED). I’m happy if they attack me because this way I learn the battlefield more. Why do they attack the Gandhi family? Because we fight for democracy and harmony. We are not a family, we are an ideology.”

Prasad said the protest against price rise and unemployment was aimed at "saving" the Gandhi family from corruption charges.